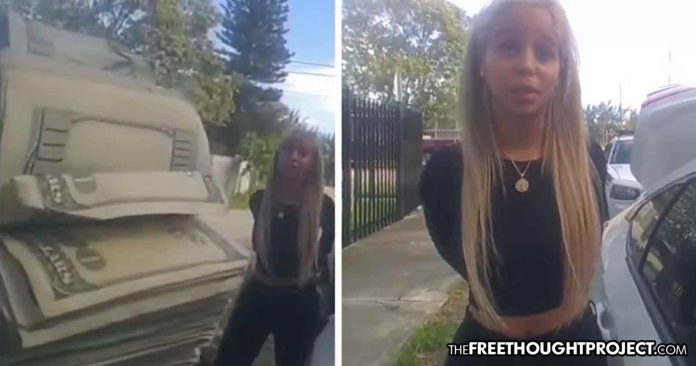 Miami, FL — Dade police are being ordered to return nearly $20,000 that was taken from a woman, who works as a stripper in Miami, and her husband during a traffic stop where an illegal search was performed. The police department is also responsible for the couples legal fees, which amounts to more than $3,000.

Lizmixell Batista was able to argue in court that the cash seized in the car were tips that she earned dancing at the Cheetah Gentleman’s Club in Hallandale Beach. Batista says that she was on her way to the bank when she was pulled over with her husband Ras Cates.

I was supposed to go the bank to deposit the money. We got bills to pay, sweetie,” she told police after the arrest.

Haley Heath, a co-worker of Batista, testified that the young dancer makes “significant cash tips” at the Cheetah Club.

In addition to the $20,000 in cash, a large cache of guns was discovered during the search, along with a small amount cannabis oil and a few bottles of “lean” cough syrup, and the arresting officers acted like they had just made the bust of the century.

“It’s amazing how something as simple as a traffic stop can lead us to crack a lot of cases. A lot of serial killers are behind bars because of traffic stops. These traffic stops lead to so many things in the criminal world and they are never routine. We warn our officers that there is no such thing as a routine traffic stop. You never know what you are going to get,” Zabaleta said.

“You have to be careful what you are dealing with as a police officer when you don’t know how many weapons are in a vehicle. A simple traffic stop in this case unfolded and lead to something so big. He had an arsenal in his car and a lot of cash and a lot of unprescribed drugs like codeine.” he added.

However, there was only a small amount of drugs recovered from the car, the money was verified as Batista’s legitimate income and all of the guns were purchased legally, registered, and Cates was permitted to carry them.

Defense attorney Jude Faccidomo told the Miami Herald that the prosecution had no choice but to dismiss the case because there was so much evidence to corroborate the defendants’ version of events, including body camera footage which showed the officer search the trunk without permission.

“What is most disturbing is that immediately following the arrest, the department went on TV and engaged in incendiary speculation without knowing the facts or even acknowledging the rampant violations of my clients’ constitutional rights,” Faccidomo said.

“I felt that the glitter on the seized cash was compelling evidence, but apparently, the police department disagreed,” he added.

It is important to point out that everything this couple was charged with were offenses that had no victim — from the guns and cash to the small amount of drugs. They even worked within the legal framework in acquiring and transporting the weapons. This is one of the rare cases where the defense was lucky enough to have such a large volume of evidence on their side that it would have been impossible to convict them.

In the vast number of cases where cash and property are seized, the victims are never reimbursed.

In fact, even one of the co-creators of the civil asset forfeiture program in the United States has said he thinks it should be abolished. “Three decades ago I helped create our civil asset forfeiture system; now it is time to end it,” Brad Cates, former director of the U.S. Justice Department’s Asset Forfeiture Office, said in February 2016.

“During the Reagan administration, I helped establish these programs because I believed they would quickly channel seized criminals’ profits into the fight against organized crime and drug cartels. Yet over time, we have created a new bad incentive: policing for profit, out of the reach of the proper legislative budget process.”

Unfortunately, although Batista was able to recover her money, she will likely have to pay taxes on that $20,000, as it is now on the books as her income.