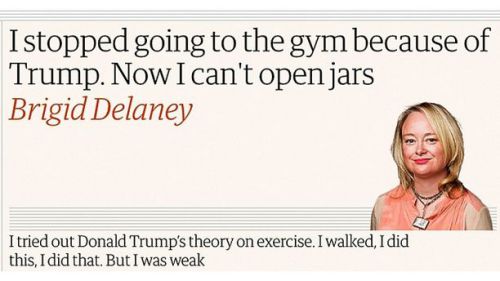 From Fox News: Trump Derangement Syndrome is even worse than anyone thought: It has now made it impossible for one woman to open a jar of pickles.

The Guardian published a column Wednesday by a woman who blames President Trump for keeping her from the gym, leaving her too weak to carry groceries or open jars.

The outlandish commentary headlined, “I stopped going to the gym because of Trump. Now I can’t open jars,” was written by Brigid Delaney, who is a senior writer for Guardian Australia. She explained that after losing a wager on the 2016 presidential election to the owner of her gym, she was forced to pull a sled in an event that appears to have been equal parts show of strength and humiliation.

“I pulled the sled like a human oxen while being filmed and the gym staff cheered. I did it. But the Trump victory soured my successful show of strength,” Delaney wrote. “Yeah, I could pull a pretend sled. But how was that going to help me when the world had been destroyed by nuclear weapons or climate change?”

Delaney then complains of a bad meal she ate while sulking about Trump defeating Hillary Clinton and decided that she wouldn’t work out any more – somehow blaming Trump for her decision.

“My thinking about fitness changed almost overnight. In tune with the times, it became more Trump, less Obama,” Delaney wrote. “In the spirit of the Donald, I drank more bottles of Diet Coke and ate more McDonald’s.”

A careful reading of the column does little to reveal whether Trump’s victory was so demoralizing that she could no longer exercise, or if she was actually inspired to adopt Trump’s aversion to working out.

Delaney cites the book “Trump Revealed” and a quote that the president once gave to Reuters about his philosophy on working out. Despite suggesting that Trump is capable of destroying the world a few sentences earlier, she decided to follow in his footsteps.

“I dropped the gym – embracing Trump’s belief that we are given a certain amount of energy and if we use it then we are depleting a finite resource,” she wrote.  “I didn’t want to die young, so I didn’t go to the gym.”

Delaney complained of not being strong enough to open jars or carry groceries, openly pondering if she could continue to skip the gym for the duration of Trump’s presidency. “Trump was going to be in power for another 1,000 years. Or at least that’s what it felt like,” she wrote before declaring that she decided to return to exercise despite her outrage over the 2016 election.