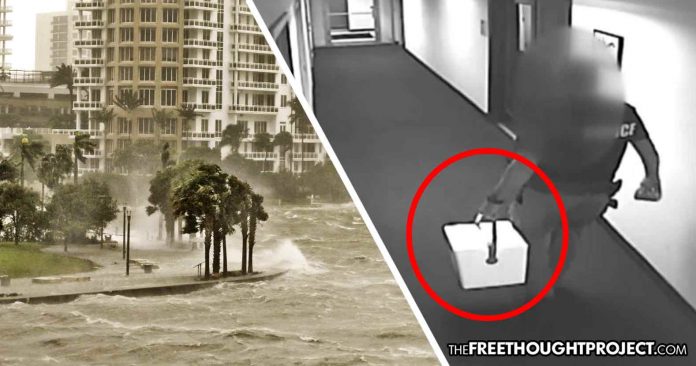 When distressed residents of the North Bay Village in Miami called 911 for help as the region was hit by the devastating Hurricane Irma last September, their calls went unanswered because local police were getting drunk instead.

According to an internal affairs report obtained by the Miami Herald, most of the police officers who were assigned to respond to these calls were safe at City Hall, sitting around a table, drinking Coronas all night.

The report claimed that the officers were having what they called a “hurricane party,” despite the fact that they were on the job, and were the only police left on the ground to help local residents. The officers were expected to answer calls and do their best to help, and were even given extremely expensive equipment for the job, including special high-water vehicles.

However, the commander reportedly told the officers that they should stay in and could drink on the job, once again highlighting the police culture that their lives are more important than the people who they are supposedly serving.

The police report stated that during the party an extremely large number of calls were ignored, many of them calling for help with major medical emergencies, fires, and burglar alarms.

Officer Walter Sajdak was one of the few officers on duty that night who was actually out in the streets trying to help people, and he had no clue that the party was taking place until he accidentally walked in on it when he returned to the building for fuel and supplies.

According to Sajdak’s testimony, he noticed that the area was littered with trash and beer bottles when he was greeted by McCready, who told him to “have a beer.” Sajdak’s says that he declined because he doesn’t drink on the job, and then he reported the incident to his supervisor after the Hurricane.

“I was upset about lives being put at risk, lives being put in danger. Lieutenant McCready, who was in charge of our Landfall Team, had jeopardized the lives of the officers that were working and the residents by drinking alcohol,” Sajdak said in his statement.

“[McVay] and I went out and handled the calls for service because the others, I guess, were in here drinking,” he added.

The officers who attended the party wrote in their report after the hurricane that “official police operations ceased due to conditions being unsafe and officer fatigue.”

Six members of team admitted to drinking on the job during the hurricane, including McCready, Sgt. James McVay, Detective Manuel Casais, and officers Ismael Chevalier, Norlan Benitez, and Ethan Cherasia.

Oddly enough, the investigation said that there was no evidence that the officers were extremely impaired, and thus their party had no impact on the emergency response efforts. However, it is obvious that if six officers were out trying to help people instead of sitting inside drinking, the rescue effort would have been far more successful.

The officers received a slap on the wrist and some small occupational penalties, but no legal action was taken against them, and they still have their jobs.

Months after the incident, Sajdak reported that he was “being targeted” for coming forward about what happened that night, and still nothing was done.

At least 75 people in the Miami area were killed by the destruction and flooding caused by hurricane Irma.