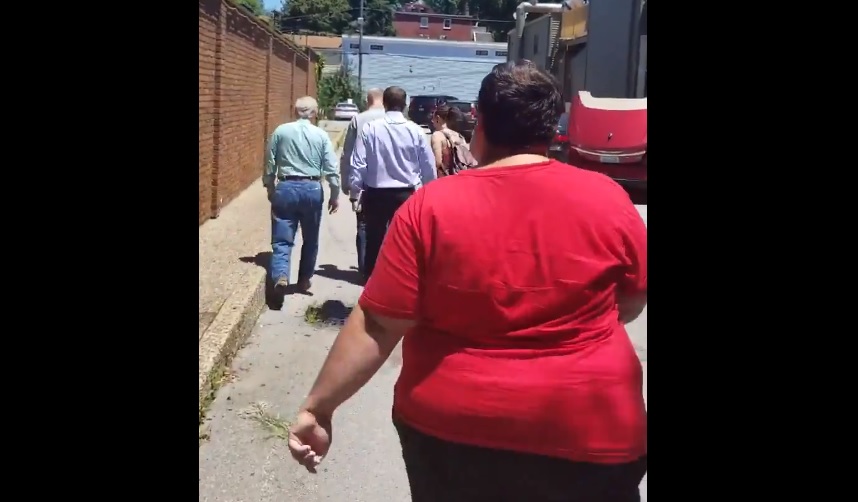 The Democrat Socialists, who call themselves “Democratic Socialists,” said on Twitter that “people like Mitch deserve no peace” because they “enable the imprisonment of babies in concentration camps.”

From the Courier Journal:

A group of protesters confronted Senate Majority Leader Mitch McConnell on Bardstown Road in Louisville Saturday, calling out “Abolish ICE,” before adding they know where he lives.

McConnell was out to lunch with Kentucky’s outgoing House Majority Floor Leader Jonathan Shell, who was upset in his May primary. Shell confirmed the two had lunch, calling the protesters “a small group of extremists.”

The interaction was captured on video and shared with Courier Journal.

In it, someone asks McConnell, “Where are the children? Where are the babies, Mitch?” — an apparent reference to the separation of children from families at the southern U.S. border.

I assumed they were searching for babies in order to abort them, but I guess either interpretation is possible.

“What are you doing to get the babies back?” someone asks in the clip.

McConnell, wearing a green shirt tucked into blue jeans, isn’t shown reacting or responding to the protesters. He walks past a sign for Bristol Bar & Grille, turns a corner and gets into a vehicle.

Before he gets into the car, someone can be heard saying, “We know where you live.”

The guy threatened “we know where you live” multiple times. No one spoke out against him.

So, for 10 years, I’ve done it the “right way.”And I’ve gotten NOWHERE. I am a middle aged suburban pta Mom, and I am fucking out of civility with this aged monster who has worked to undermine our democracy and turns a blind eye to suffering so he can work his agenda.

Right-wingers described the protesters as stalkers:

They also said foreign nationals are not owed any due process and pointed out how these “concentration camps” were set up under Obama:

Personally, I think anything which helps these Democrat Socialists get the exercise they so desperately need is probably overall a positive, especially if we’re going to have to pay for their healthcare.