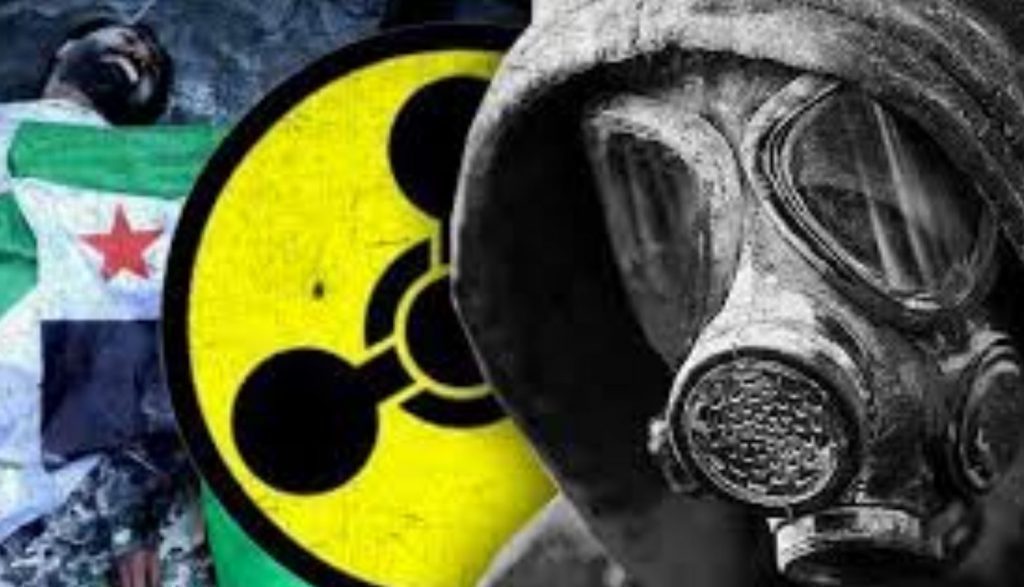 A preliminary report published by the Organization for the Prohibition of Chemical Weapons has found no traces of any nerve agent at the site of a supposed chemical attack in Douma, Syria.

A newly published report from the Organization for the Prohibition of Chemical Weapons (OPCW) found no traces of any nerve agent at the site of a suspected chemical attack in the Syrian city of Douma. However, mixed messages are being spread as “mainstream” corporate media outlets report that chlorine has been found.

The OPCW released the results of their fact-finding mission regarding allegations of chemical weapons use in Douma on April 7, 2018. The mission included on-site visits to collect environmental samples, interviews with witnesses, and data collection. The OPCW writes that lab analysis of the samples “show that no organophosphorous nerve agents or their degradation products were detected in the environmental samples or in the plasma samples taken from alleged casualties.” The report does state that “explosive residues” and “various chlorinated organic chemicals” were found in samples from two sites. The fact finding mission team is still working on drafting final conclusions.

No organophosphorous nerve agents or their degradation products were detected in the environmental samples or in the plasma samples taken from alleged casualties.

Without waiting for a proper investigation President Trump ordered the United States military to drop more than 100 Tomahawk missiles on Damascus. The U.S. relied on alleged blood and urine data to justify this attack, but the OPCW makes no mention of any blood or urine samples.

Despite the fact that the interim OPCW report only mentions chlorine two times, the corporate media ran several headlines which state that chlorine was found in the samples. “Interim OPCW report finds proof of chlorine used in Syria’s Douma,”  Al Jazeera wrote.  Reuters ran a story titled “Chemical weapons agency finds ‘chlorinated’ chemicals in Syria’s Douma,” and later issued a correction to clarify that it what the OPCW found was “‘various chlorinated organic chemicals’ instead of chlorine.” The BBC also changed its headline from “chlorine gas” to “possible chlorine.”

Again, the report states that, “No organophosphorous nerve agents or their degradation products were detected in the environmental samples or in the plasma samples taken from alleged casualties.” It also states that “various chlorinated organic chemicals” were found but this tells us nothing. As ZeroHedge notes, “importantly, the interim report does not include indications of quantities or concentrations in which these common substances were found, making it impossible to conclude further whether they were part of a chemical attack or were weaponized”. Throughout the technical notes of samples taken the report states, “No chemicals relevant to CWC [Chemical Weapons Convention] have been found.”

This would not be the first time the corporate media rushed to judgement or the military rushed to war before taking the time to investigate an alleged terror attack. We are all well aware of the lies around the Iraq War and Weapons of Mass Destruction, and there is plenty of reason to be skeptical of the claims around chemical attacks in Syria. We must take a step back and look at the full picture to understand what is truly happening in Syria and what role the OPCW will play in the coming months.

The OPCW’s decision means it is up to the Secretariat to put in place arrangements “to identify the perpetrators of the use of chemical weapons in the Syrian Arab Republic by identifying and reporting on all information potentially relevant to the origin of those chemical weapons in those instances in which the OPCW Fact-Finding Mission determines or has determined that use or likely use occurred, and cases for which the OPCW-UN Joint Investigative Mechanism has not issued a report.”

“Currently there is no mechanism that would ensure that those who use chemical weapons are held fully accountable,” OPCW’s director general Ahmet Üzümcü said. “If accountability is avoided, the potential re-emergence and acceptance of chemicals as weapons of war and terror will not be deterred.”

The decision should be met with skepticism. First, the OPCW member nations vote to give the organization power to point fingers and then less than a week later the corporate media attempts to use the interim report as evidence for their ongoing chemical weapon attacks. The vote by the OPCW is foreshadowing the organization pointing the fingers at the Syrian government in the hopes that the warmongers will finally get public approval and international support to remove Assad and make their way into Iran. Don’t be surprised if the OPCW starts pointing fingers at Syrian officials in the coming weeks and months.