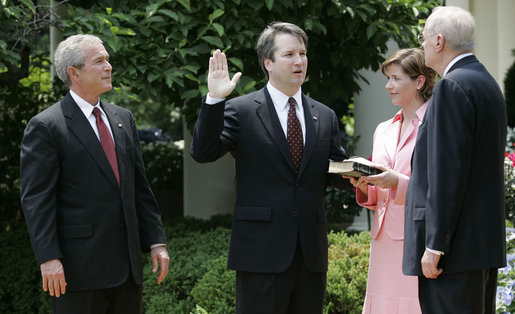 The weeping, wailing and gnashing of teeth has begun on the left, but the truth is that Donald Trump could have nominated someone far more conservative on Monday night.  Over the next several months there will be endless protests in Washington D.C. as liberals moan and groan about “the end of our freedoms”, and Brett Kavanaugh will be relentlessly portrayed as a conservative devil by the mainstream media.  And even though NBC News is insisting that Kavanaugh “would make the high court solidly conservative” if he is confirmed, the reality of the matter is that there are some pretty good reasons why conservatives should be deeply concerned about this pick.  Just because a Republican president nominates someone to the Supreme Court does not mean that individual will make a good judge.  For example, Ronald Reagan nominated Anthony Kennedy in 1987, and he turned out to be a complete and utter disaster.  If Reagan had nominated someone different, the entire modern history of the U.S. Supreme Court could have been completely different.  With the Court still so divided, the stakes are incredibly high, and we must not get another Kennedy.  So it is troubling that Brett Kavanaugh clerked for Kennedy and has always had nothing but good things to say about him.  Anyone that would look to Justice Kennedy as any sort of a role model is definitely not fit for a seat on the highest court in the land.

Beyond his connections to Kennedy, what is troubling conservatives more than anything are some of his opinions while serving on the appellate court level.

For instance, not too long ago he ruled that an illegal immigrant “has a right to an abortion in the United States”…

Judge Brett Kavanaugh, who was appointed to the U.S. Court of Appeals for the District of Columbia by President George W. Bush, accepted the assumption in a dissenting opinion he filed last October in the case of Garza v. Hargan that a teenage illegal alien caught at the border and put in detention has a right to an abortion in the United States.

In that opinion he also added that “all parties to this case recognize Roe v. Wade and Planned Parenthood v. Casey as precedents we must follow.”

Throughout his entire career, Kavanaugh has been extremely engaged in Republican politics, but he has never expressed public opposition to Roe v. Wade a single time.

So despite the outrageous claims of the left that Roe v. Wade “is about to be overturned”, the truth is that we actually have no idea how Brett Kavanaugh would rule on Roe v. Wade, and that is absolutely frightening.

In addition, back in 2011 Kavanaugh decided not to rule against Obamacare’s individual mandate…

Judge Brett Kavanaugh, who was appointed to the U.S. Court of Appeals for the District of Columbia by President George W. Bush, declined to rule against Obamacare’s individual mandate when it came before his court in 2011 and argued that the case could not be decided by a federal court until at least 2015 because of the Anti-Injunction Act.

All of the “experts” on television keep telling us how “conservative” Kavanaugh is, but looking at his record that is hard to see.

Following a brief period in private law practice, he became Bush’s White House counsel and then staff secretary before he was nominated to be a federal judge. He met his wife while working at the White House, where she was the president’s personal secretary.

Donald Trump likes to think that he is making his mark on the Supreme Court, but the reality of the matter is that we probably would have gotten the exact same nomination if George W. Bush was still in the White House today.

I hope that he proves me wrong, but I believe that the nomination of Kavanaugh is a huge mistake.  I believe that he is a moderate, especially on social issues, and I do not trust him.

But most conservatives are going to assume that Kavanaugh must be wonderful since he is “Trump’s choice”, and they are going to rally around him.

Instead, it will be the left that will try to keep Kavanaugh off the Court, and within minutes of the announcement of his nomination there were already hundreds of protesters on the steps of the U.S. Supreme Court building…

It didn’t take long for protests to start. Around 15 minutes after the announcement, chants had shifted to “Hey Hey, Ho Ho, Kavanaugh has got to go.” Some protesters had makeshift signs that had been updated with the nominee only minutes after his announcement.

Sen. Bernie Sanders, D-Vt., told the crowd of protesters that they should be ready to challenge the nomination.

“Are you ready for a fight? Are you ready to defend Roe vs. Wade?” Sanders said. “This is a tough fight but it is a fight that we can win . . . We have the American people on our side, now we have to go state by state by state to make sure senators do what their constituents want.”

If the Democrats were smart, they would conduct some token protests to make it look good and then confirm Kavanaugh as quickly as possible.

With Trump in the White House, they simply are not going to get an activist liberal judge on to the Court.  Another judge in the mold of Anthony Kennedy is about the best that they could possibly hope for, and that is very likely what they are going to get with Kavanaugh.

In the end, it is true conservatives that should be fighting this nomination, but we all know that is simply not going to happen.