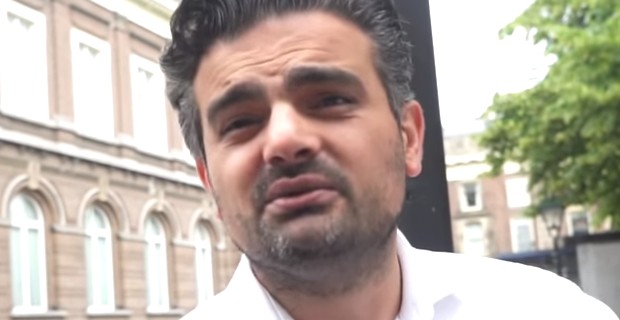 “They should get lost!”

The leader of the Muslim DENK party in the Netherlands has caused controversy by telling Dutch citizens to leave their own country if they don’t like the increasing number of Muslim migrants populating Dutch cities.

“If they don’t like a changing Netherlands in which people with different cultures live… like in the city of Zaandam or the neighbourhood of Poelenburg, they should get lost,” Tunahan Kuzu said during an interview.

Anti-mass immigration politician Geert Wilders responded to Kuzu by telling him to go home to Turkey.

In the 2017 Dutch election, Kuzu’s party, which refuses to recognize the Armenian genocide, attracted 200,000 votes, enabling it to gain three seats in parliament.

What Kuzu is specifically referring to when he speaks of “a changing Netherlands” remains unclear.

Maybe he’s referring to how every year a thousand underage Dutch girls are trafficked into sex slavery by pimps with migrant backgrounds.

Maybe he’s referring to school children being indoctrinated into the new diversity-friendly environment by being made to pray in mosques.

It's great that these kids are learning about other cultures while they visit the Middle East.

Oh wait, this is Holland. pic.twitter.com/W4Vlm9GGkk

Maybe he’s referring to graffiti scrawled on the wall of a primary school that read, “Cancer Wilders is gonna die,” a reference to the anti-immigration politician, “attack Jews,” “kill all Jews,” “Jews gonna die,” or the term “ISIS”.

Graffiti on a primary school in the Netherlands. This is the cultural enrichment Europe has invited in. pic.twitter.com/m8M926IpWH

Maybe he’s referring to the fact that violent homophobic attacks on gay people in Holland by Muslim migrant youths are increasing.

Maybe he’s referring to the fantastic economic benefits that Muslim migrants bring to the Netherlands, like the 85% of “refugees” who remain unemployed and on welfare since they arrived in the country in 2014.

In any case, the message is clear, get on board with the new way of doing things, or get out of the country.

If these rioting Erdogan-supporting Islamists are so patriotic about Turkey, why did they all move to the Netherlands? 🤔 pic.twitter.com/PyAyBbg63J