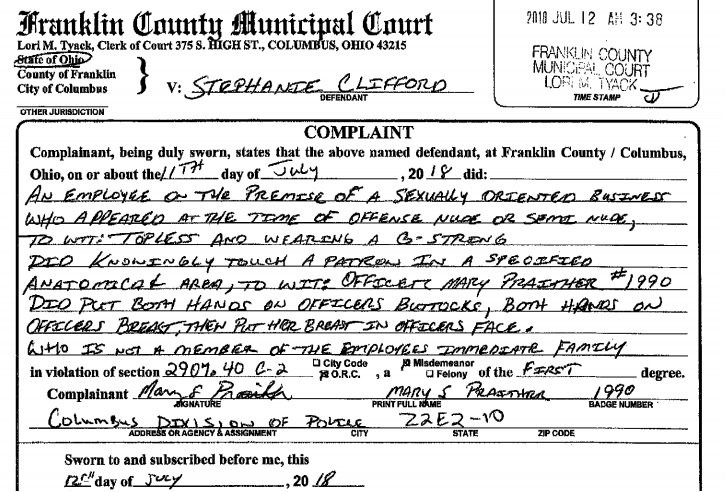 It appears she improperly touched the breasts and buttocks of female police officer Mary Praither. 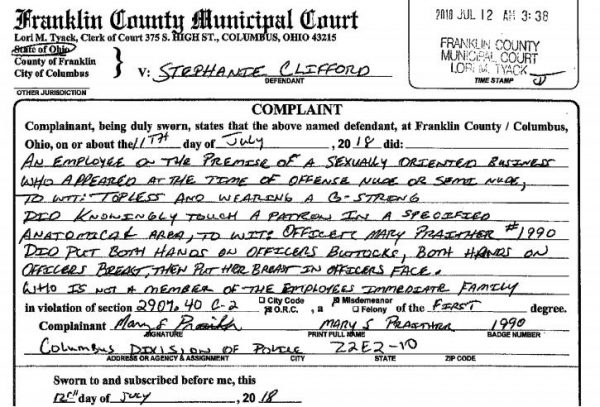 Stormy Daniels apparently put her own breasts in the officer’s face as well.

The law that was allegedly violated was Ohio statute 2907.40, C2

Stormy Daniels has previously alleged and maintains that she had sex with Donald Trump in 2006, while he was married to Melania Trump.

Her attorney claims the arrest was a politically motivated set up.

Just rcvd word that my client @StormyDaniels was arrested in Columbus Ohio whole performing the same act she has performed across the nation at nearly a hundred strip clubs. This was a setup & politically motivated. It reeks of desperation. We will fight all bogus charges. #Basta

She was arrested for allegedly allowing a customer to touch her while on stage in a non sexual manner! Are you kidding me? They are devoting law enforcement resources to sting operations for this? There has to be higher priorities!!! #SetUp #Basta

No comments were given about how exposing her alleged affair with Donald Trump was not politically motivated.

Stormy Daniels is a 39 year old stripper that is lucky she can still find work. Would she have even been on stage had it not been for a certain amount of fame that comes with being Donald Trump’s accuser? It is a legitimate question.

If this was a setup, she should certainly not be surprised that there would be retaliation for claiming an affair with a sitting President. When you mess with fire, you often get burned.

Vice officers make arrests and she allegedly violated the law. Crying foul play does not change that.

Who benefits more from this arrest? An aging stripper who is struggling to keep her name in the news? Or President Trump who obviously wishes this woman would just go away?

Something to think about…