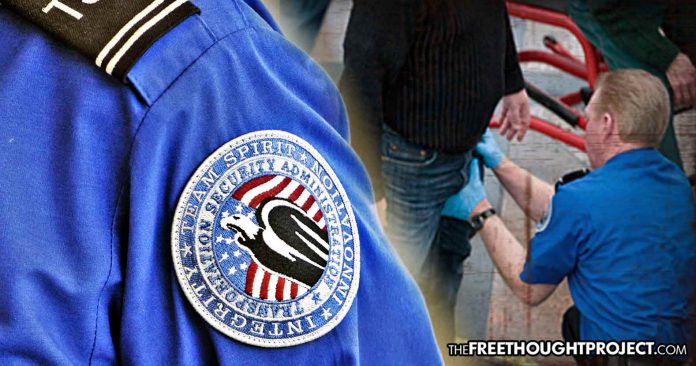 The TSA – whose job is supposedly “fighting terrorism” – is, without doubt, one of America’s most corrupt and incompetent agencies. However, last year, they apparently became so unsatisfied with the mere ability to strip search babies, remove colostomy bags, beat up blind cancer patients, and fondle your genitalia, that they announced a more invasive physical pat-downs. The pat-downs, which TSA warned would probably prompt assault complaints with the police department because of their invasive nature, have been implemented and now, a federal court ruled that these complaints mean absolutely nothing because the TSA cannot be sued.

As the Washington Post reports, the U.S. Court of Appeals for the 3rd Circuit, which sits in Philadelphia, held that TSA officers enjoy sovereign immunity because, despite their badges and titles as “officers,” they do not qualify as “investigative or law enforcement officers” who could be held legally responsible for abuses under the Federal Tort Claims Act.

The court looked at the question of when a TSA search should prompt protection under the Fourth Amendment. The court ominously noted that TSA screeners are more like federal meat inspectors than cops. Indeed, anyone whose ever found themselves subject to the invasive nature of a TSA pat down knows just how much this agency likes to inspect “meat.”

What this ruling highlights is the dehumanizing nature of the federal government who likens human beings who wish to travel by airplane as “meat” to be “inspected.”

“[W]e are sympathetic to the concerns this may raise as a matter of policy, particularly given the nature and frequency of TSOs’ contact with the flying public,” the court stated.

In a moment of rational thought, however, a single judge, Judge Thomas L. Ambro, dissented and aptly noted that the TSA are no different than cops conducting traffic stops and therefore should be held to the same degree of liability — which, as TFTP has reported at length, is not much. But, at least, they are not immune.

As WaPo reported, Ambro also noted that the majority’s opinion would bar passengers from bringing legal claims even in the most extreme cases, such as when TSA officers at Denver International Airport were accused of manipulating security procedures so that they could grope “attractive” male passengers.

“Their opinion leaves several plaintiffs without a remedy, even if a TSO assaults them, wrongfully detains them, or fabricates criminal charges against them,” Ambro wrote. “I do not believe this is what Congress intended.”

The court’s decision stemmed from the case of Nadine Pellegrino, a business consultant from Florida who experienced the invasive and demeaning nature of the TSA first hand.

According to court papers, Pellegrino had been randomly selected for additional screening at the Philadelphia airport before boarding a US Airways flight to Fort Lauderdale, Florida.

Pellegrino, then 57, objected to the invasiveness of the search, but conditions deteriorated and she was later jailed for about 18 hours, the papers show. Criminal charges were filed, and Pellegrino was acquitted at a March 2008 trial.

The TSA, who has never stopped a terror attack and is unable to stop 95 percent of the tests against its tactics, gropes and molests children and adults alike — who unquestioningly accept it. Now, the very small percentage of people who actually stand up to them will have no recourse.

We now know a potential reason why the TSA is putting together a watchlist of those who criticize them. Once they snub out the last few people who value freedom, Americans more concerned with an ineffective facade of safety instead of individual liberty will be lining up to have their genitals fondled and groped so they can feel secure.