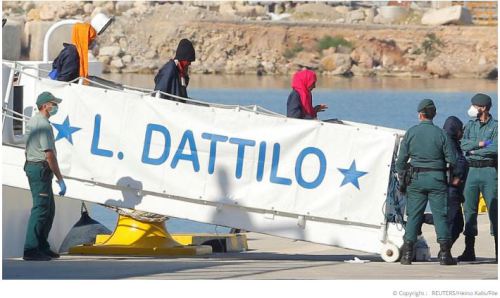 A private Italian ship answered a distress call and rescued 67 “migrants” off the coast of Libya.

Alice Cudder reports for EuroNews that on July 8, 2018, an Italian oil rig supply ship Vos Thalassa, owned by international shipping company Vroon, responded to a distress call off the Libyan coast by taking 67 migrants, including six children, onboard.

According to an account by Vroon, when the vessel turned to meet with the Libyan coast guard to transfer the migrants, the migrants “started to threaten the crew, surrounding and pushing them and making ‘cut your throat’ gestures. Because of these threats the vessel returned to its position and reported this situation to the MRCC [Maritime Rescue Coordination Centre] in Rome.”

The “migrants” were handed over to the Italian coast guard the next evening.

The shipping company said being “severely outnumbered on board a merchant vessel by an angry crowd that has very little to lose is very frightening. We are very proud of the professionalism of our crew in these very challenging circumstances.”

The Italian coast guard echoed the merchant vessel’s account in a statement to EuroNews, saying the commander of the ship “reported a situation of serious danger for the security of the ship and its crew… caused by attitudes threatening the crew by some migrants”.

Italy’s Transport Minister Danilo Toninelli said on Twitter that he was proud of the Italian coast guard for taking the migrants “who were endangering the life of the Italian cruiser Vos Thalassa. Now onwards with investigations to punish troublemakers.”

News of the incident comes as Italy continues to clamp down on migrant arrivals. In a recent interview with an Italian radio station, Interior Minister Matteo Salvini said the country’s ports would “be closed all summer” to NGOs transporting migrants and that the ban would include “the furnishing of fuel” to their vessels.