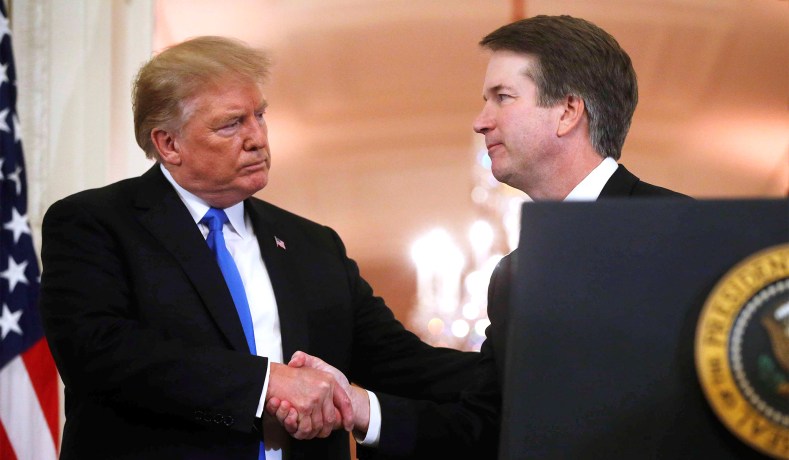 For anyone that thinks Judge Kavanaugh will be an “easy” confirmation, think again.

Recently there has been a lot of conjecture and concern in the mainstream press on how Kavanaugh might handle abortion cases.

Judge Brett M. Kavanaugh has only one major abortion ruling in his 12 years on the federal bench, but that forceful opinion will define the coming debate on what his elevation to the Supreme Court would mean for a woman’s constitutional right to the procedure.

Antiabortion activists say they are assured, without specific evidence in his writings, that President Trump’s second nominee could provide the long-sought final piece to a Supreme Court majority that would allow far more restrictions on abortion — and perhaps even overturn the court’s abortion rights precedents that began 45 years ago in Roe v. Wade.

On this, abortion rights advocates agree with their opponents, and they point to the strongly worded dissent Kavanaugh issued last fall in a case involving a pregnant immigrant teenagerin federal custody.

But there is more.

Lifenews just published text from a 2017 speech in which Kavanaugh slammed Roe V Wade, saying it was a “Freewheeling Judicial Creation of Unenumerated Rights”:

The SCOTUS nominee called Roe a “freewheeling judicial creation of unenumerated rights that were not rooted in the nation’s history and tradition.”

Here’s the text of the speech in context:

In later cases, Rehnquist reiterated his view that unenumerated rights could be recognized by the courts only if the asserted right was rooted in the nation’s history and tradition. The 1997 case of Washington v. Glucksberg involved an asserted right to assisted suicide. For a five-to-four majority this time, Rehnquist wrote the opinion for the Court saying that the unenumerated rights and liberties protected by the due process clause are those rights that are deeply rooted in the nation’s history and tradition. And he rejected the claim that assisted suicide qualified as such a fundamental right.

Of course, even a first-year law student could tell you that the Glucksberg approach to unenumerated rights was not consistent with the approach of the abortion cases such as Roe v. Wade in 1973—as well as the 1992 decision reaffirming Roe, known as Planned Parenthood v. Casey.

What to make of that? In this context, it is fair to say that Justice Rehnquist was not successful in convincing a majority of the justices in the context of abortion either in Roe itself or in the later cases such as Casey, in the latter case perhaps because of stare decisis. But he was successful in stemming the general tide of freewheeling judicial creation of unenumerated rights that were not rooted in the nation’s history and tradition. The Glucksberg case stands to this day as an important precedent, limiting the Court’s role in the realm of social policy and helping to ensure that the Court operates more as a court of law and less as an institution of social policy.

Will we see an overturning of Roe V Wade in our lifetime?

If Kavanaugh is confirmed it would seem to be a step in that direction.

But it is doubtful that confirmation will happen without a serious fight from the left.

US Citizen: I Saw The Socialist Revolution Beginning In Chile – Now It’s Happening In The US
November 27th, 2020 Sons of Liberty Media

Another Good Judge Stands In The Gap Between Americans & Tyranny