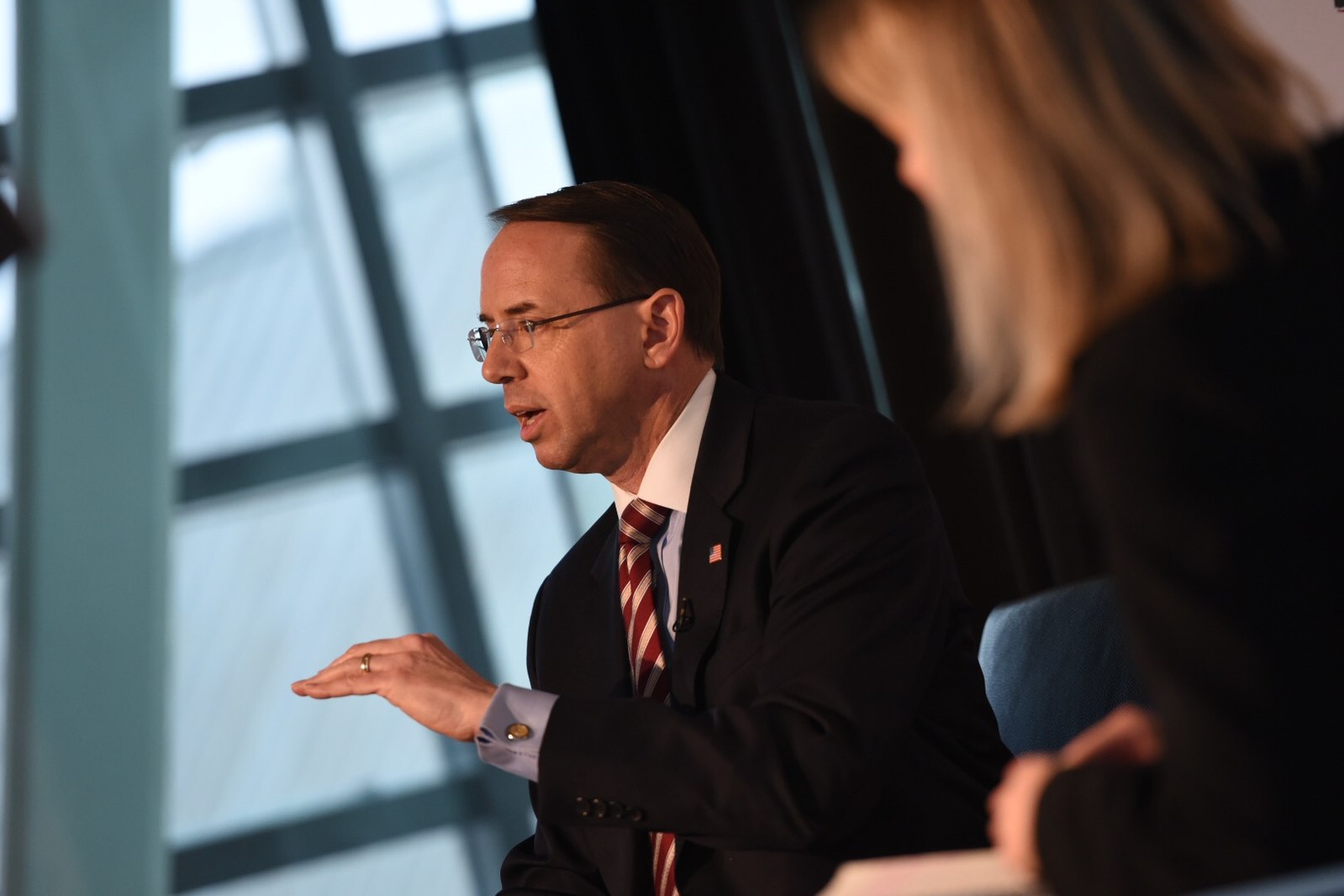 If this happens, it could change everything.  Even more than Peter Strzok, Deputy Attorney General Rod Rosenstein is a perfect example of a deep state operative.  No matter who we have sent to Washington, our government agencies have always been dominated by deep state operatives such as Rosenstein, and up until recently the American people have seemed powerless to do anything about it.  But now there is a ray of hope.  Peter Strzok’s nearly 10 hour grilling in front of Congress on Thursday was definitely a step in the right direction, and on Friday we learned that conservatives are preparing to begin impeachment proceedings against Rosenstein.  In fact, Politico is reporting that Mark Meadows actually had the impeachment document on the House floor at the exact moment that Rosenstein announced indictments against 12 Russian intelligence officials for hacking the Democratic National Committee…

House conservatives are preparing a new push to oust Deputy Attorney General Rod Rosenstein, according to three conservative Capitol Hill sources — putting the finishing touches on an impeachment filing even as Rosenstein announced the indictment of 12 Russian intelligence officers for interfering in the 2016 election.

House Freedom Caucus Chairman Mark Meadows, in fact, had the impeachment document on the floor of the House at the very moment that Rosenstein spoke to reporters and TV cameras Friday.

This kind of high drama is very rare in the halls of Congress, and even though it didn’t happen on Friday, the impeachment document reportedly could be filed “as soon as Monday”…

Conservative sources say they could file the impeachment document as soon as Monday, as Meadows and Freedom Caucus founder Jim Jordan (R-Ohio) look to build Republican support in the House. One source cautioned, however, that the timing was still fluid.

So why are Republicans so upset with Rosenstein?

For one thing, they feel like he has continually stonewalled their investigation into corruption at the FBI, and that is definitely a very serious matter.

Secondly, Rosenstein is ultimately where “the buck stops” when it comes to the Mueller investigation.  The following comes from the Hill…

Rosenstein has long been a target for Republicans who are frustrated over special counsel Robert Mueller’s probe into election meddling by Russia and possible collusion between Moscow and the Trump campaign. He is overseeing the probe after Attorney General Jeff Sessions recused himself from the Russia investigation, and some argue that he’s the only person with the legal authority to fire Mueller.

If Rosenstein were to be impeached, that would almost certainly mean the end of the Mueller investigation, and Democrats would go absolutely ballistic.

But in order for any of this to happen, conservatives are going to have to get the support of Paul Ryan, and Politico is reporting that Ryan has “clearly been uncomfortable with the notion of going after Rosenstein…

But House GOP leaders like Speaker Paul Ryan have clearly been uncomfortable with the notion of going after Rosenstein. It’s unlikely that will change anytime soon, especially so soon after the latest indictments. Ryan’s office was not immediately available for comment.

Without Ryan’s support, there is no way that there will be enough votes for impeachment, and so he is the key.

And the clock is ticking, because the November mid-term elections are rapidly approaching.

Traditionally, the opposition party has always done extremely well during the first mid-term election of a new presidency, and signs continue to emerge that we will see a similar pattern this time around.

Democrats hold a massive voter lead in states that require party registration, a gap of 12 million that could be key to whether the party takes control of the House and Senate in the fall midterm congressional elections, according to a new analysis.

Overall, 40 percent of voters in 31 party registration states are Democrats, 29 percent are Republicans, and 28 percent are independents, according to a new report of July numbers from the University of Virginia’s Center for Politics. The states include several with key battles over House seats such as California, New York, Florida, and Pennsylvania.

The lead is significant, said Rhodes Cook’s analysis in Center Director Larry Sabato’s “Crystal Ball” newsletter, because in the past presidential election the majority party in 24 of the 31 states won, especially among Republican states.

I know that a lot of you may not want to hear this, but voter registration numbers are very, very important.

Yes, Republicans could still potentially win in states where the voter registration numbers are very much against them, but at this point the left has far more passion and energy than we do.

As noted in the excerpt above, the party that held the voter registration lead ended up winning in 24 out of 31 states in 2016.

That is a winning percentage of more than 77 percent.

Yes, the Senate map is favorable for Republicans in 2018.  It will be a lot more difficult for Democrats to take the Senate than it will be for them to take the House, but if the Democrats take either body there will be absolute gridlock in D.C. leading into the 2020 election.  The Trump agenda will be dead in the water, the Republican agenda will be dead in the water, and next to nothing will get accomplished.

The Republicans have had two years to accomplish everything that they wanted to do, and they have completely fumbled the football.

It would be nice if they could at least impeach a deep state operative such as Rosenstein, but with swamp creature Paul Ryan still in charge, that is going to be quite a challenge.