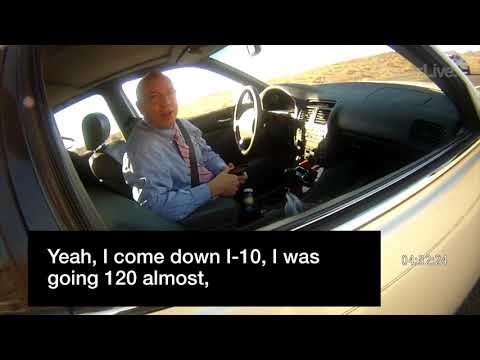 Some people really are above the law, at least in Arizona.

Rep. Paul Mosley (R–Lake Havasu City) was caught going 97 mph in a 55 mph zone and bragged to the police officer about going 120 mph earlier. There was no emergency. He  was simply in a hurry to get home.

An Arizona politician has been caught on camera bragging that he’s exempt from the law. The body-cam video, first shared by Parker Live Online, shows a sheriff’s deputy speaking with state Rep. Paul Mosley (R–Lake Havasu City) after pulling him over for speeding.

“I informed Mosley that 97 mph in a 55 mph zone is considered criminal speed,” the deputy wrote in his written report. “Mosley stated he was just in a hurry to get home to surprise his family in Lake Havasu City, Arizona. Mosley also told me that I should just let him go and that I shouldn’t waste anymore of my time dealing with him due to his immunity as a government official.”

In the video, the deputy asks Mosley to watch his speed regardless of the reason. Mosley responds, “Well, I was doing 120 earlier.” He then continued to brag about his vehicle’s ability to speed and why he preferred the mode of transportation seen in the video over his Prius. The deputy asked Mosley if he sped just because he knew he could get away with it. Mosley answered that he broke the law because he was trying to get home.

In the video, the deputy asks Mosley to watch his speed regardless of the reason. Mosley responds, “Well, I was doing 120 earlier.”

No ticket was issued. Mosley was allowed to go with a warning.

In Arizona, public officials really are above the law in some circumstances. Article 4 Part 2 Section 6 of the Arizona Constitution states:

Section 6. Members of the legislature shall be privileged from arrest in all cases except treason, felony, and breach of the peace, and they shall not be subject to any civil process during the session of the legislature, nor for fifteen days next before the commencement of each session.

So when Mosley claimed he was above the law, he was correct. In Arizona members of the legislature have rights that other residents of The Grand Canyon State do not.

Reason notes that the House Speaker did make a critical statement, but did not deny that legislative privilege exists in Arizona. Speaker Mesnard simply noted that the privilege had been abused in this case.

House Speaker J.D. Mesnard criticized Mosley’s use of immunity, saying, “Nothing short of an emergency justifies that kind of speeding, and assertions of immunity in that situation seem outside the intent of the constitutional provision regarding legislative immunity.”

This incident happened in March of this year.