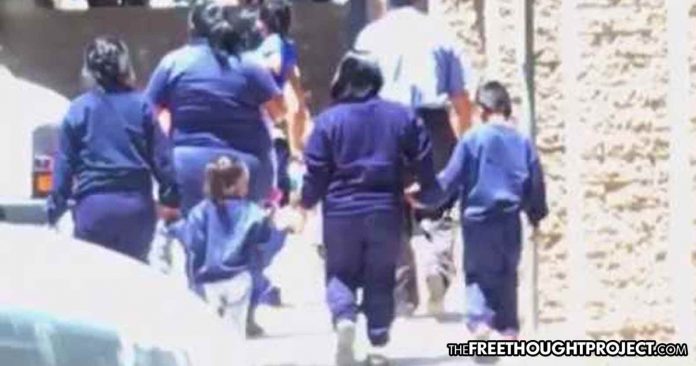 Phoenix, AZ – When concerned neighbors called police because they believed dozens of children were being trafficked in their neighborhood, they learned that the children were actually being held in a black site prison operated by defense contractors.

A vacant office building with dark windows in a quiet neighborhood has become a subject of controversy after residents began documenting the dozens of children who were transported to the building in white vans, and then never seen again.

The building is not licensed to hold children or to act as a shelter, and it is owned by MVM Inc., a defense contractor that once provided guards for CIA facilities in Iraq and has made nearly $250 million transporting immigrant children since 2014, according to a report from Reveal from The Center for Investigative Reporting.

The company’s website specifically claims that “the current services MVM provides consist of transporting undocumented families and unaccompanied children to Department of Health and Human Services designated facilities—we have not and currently do not operate shelters or any other type of housing for minors.”

However, Lianna Dunlap told Reveal that she became suspicious about what was going on at the office building in her neighborhood that is owned by MVM when she noticed new security cameras and extra locks on the exterior last month—and then saw several white vans transporting small children to the building.

“There’s been times where I drive by and I just start crying because, you know, it’s right behind my house. I don’t know and I think that’s the worst part—not knowing what’s actually going on in there and just hoping that they’re OK,” Dunlap said.

Neighbors claimed that they saw pallets of water and boxes of food dropped off at the building, but they never saw the children who were escorted inside, and the darkened windows made them concerned that the children were victims of trafficking, and that they were being harmed inside.

Another neighbor, Kristen Brown, told Reveal that as a mother of a 2-year-old son, she was immediately concerned about the lack of space inside the building and the lack of access to sunlight.

“My kid has the ability to run around and play, and there are 40 kids in that place that I don’t know what you’re doing with,” Brown said. “That, as a mom, it doesn’t feel right.”

Brown also said she tried to talk to employees to ask them what was going on. She claimed that when she asked one employee what kind of business they were conducting, he said “Transportation,” and when she questioned what they were transporting, he said, “Humans.”

When concerned neighbors called the police to report the suspicious activity, they were told that it was completely legal and authorized by the government. When asked for a statement, Phoenix Police Sgt. Vince Lewis claimed that U.S. Immigration and Customs Enforcement confirmed that MVM was “contracted to perform that transport.”

The report noted that when asked for a statement, a spokesperson for MVM initially pointed to the claim that the company does not run shelters or childcare facilities. However, when the spokesperson learned that neighbors had video evidence of the children being escorted into the building, the tone changed and the spokesperson insisted that the building was being used as “a temporary holding place” for children before they are transported elsewhere.

That “temporary” holding place held dozens of children for at least 3 weeks before the neighbors claimed that they saw five unmarked 12-passenger vans arrive at the building and fill up with children.

Dunlap told Reveal that as soon as the workers saw her watching the scene from her kitchen window, they moved their vehicles in an attempt to block her view.

As The Free Thought Project has reported, this is not the first time groups of young children were seen being transported to discreet locations. Last month, around the same time that the children in Phoenix were taken away from the dark office building, cellphone footage was released that showed a group of young migrant girls—some of them with their heads covered by dark blankets—being escorted from a facility in New York City and loaded into vehicles in the middle of the night.

EXCLUSIVE: Children from the southern border are being brought to NYC after being separated from their families.
Overnight, @joshrobin captured video of unusual activity at a foster agency in East Harlem. #MorningsOn1 pic.twitter.com/WhiN27wb5T

Following the release of the videos from concerned neighbors in Phoenix, Gov. Doug Ducey’s office released a statement claiming the Arizona Department of Health Services has been ordered to monitor MVM Inc.

“The governor has been very clear: every child deserves to be properly cared for, and he takes issues around child safety very seriously,” the statement said. “While DHS has not received a formal complaint about this issue, they have proactively assigned staff to visit the site. Additionally, our office has instructed them to monitor this situation closely to ensure child and public safety comes first.”

Several questions remain—Where did the dozens of young children come from and why were they locked in a small, dark building with no access to sunlight for several weeks? What transpired inside the building during that time, and were any of the children harmed mentally, physically or emotionally as a result? Have the children been reunited with their parents? And, most importantly, will anyone be held accountable for the apparent inhumane treatment of these young, innocent children?