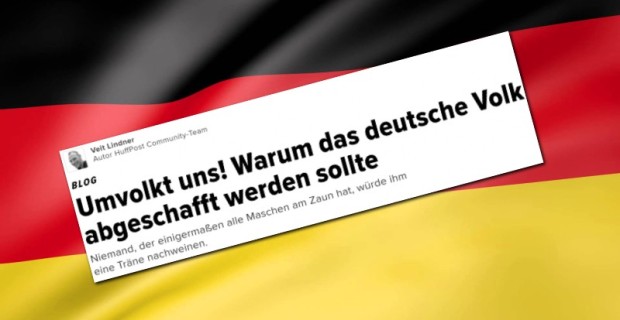 A writer for Huffington Post Germany has openly called for German citizens to be replaced with foreign migrants in order to stop the rise of populism.

The article, which was posted on Monday, is entitled Repeople us! Why the German people should be abolished (translation) .

Writer Veit Lindner asserts that to stop the momentum of the “new right,” “it would actually be best to just replace” the German people with foreigners.

“Attention, Germans! Fall in for comprehensive repeopling!” he writes, before going on to welcome, “Black, brown, yellow, white, Asians and Arabs, Africans, you people from America, India, people of all faiths – come and help us! Stream in and repeople us, but thoroughly!”

“A little more genetic and cultural seed-scattering here and a little more self-abolition through reproduction fatigue there – that, as Deniz Yücel once called it, would be the “most beautiful side of the perishing of a people,” added Lindner, remarking, “We are either all foreigners or no one is.”

Lindner’s bizarre fetish to see ethnic Germans abolished is not that far removed from comments made by mainstream German politicians.

At the height of the wave of migrants flooding into Germany in 2015, the Green Party’s Stefanie von Berg said in a speech before the Bundestag that Germans will be a minority in their own cities within 30 years and that this is a “good thing”.

“Our society will change. Our city will change radically. I hold that in 20, 30 years there will no longer be (German) majorities in our city,” she said.

“We will live in a city that thrives on having many different ethnicities. We will have plenty of people and live in a supercultural society. This is what we will have in the future. And I want to make it very clear, especially towards those right wingers, this is a good thing!” she added.

As we have previously documented, instead of addressing the huge problems 2 million migrants have brought to the country, the German government appears more intent on indoctrinating Germans to accept the new way of things by crushing dissent and brainwashing people into compliance.