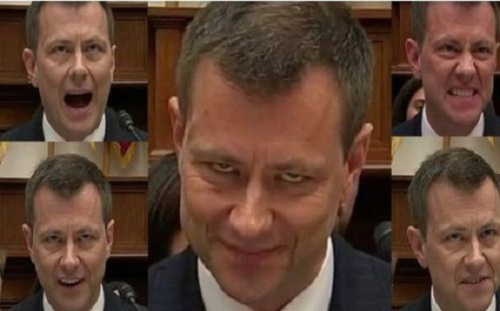 Peter Strzok (pronounced “struck”) is the FBI agent and chief of the Bureau’s Counterespionage Section who led two of the FBI’s most important investigations into:

Strzok had worked with Special Counsel Robert Mueller in the Russian investigation, but was removed in late July 2017 after the discovery of some 50,000 text messages he’d exchanged with Lisa Page — a colleague who was also working on the Russian investigation and with whom Strzok was having an adulterous affair — throughout the 2016 presidential election and first year of the Trump administration.

In their text messages, Strzok and Page show their clear political bias against Donald Trump and for Hillary Clinton, although FBI agents are supposed to be non-partisan in doing their work. The two adulterers bashed Trump and discussed concerns about being too tough on Hillary Clinton in their investigation into her unlawful use of a private email server.

In one particular message, when Page asked if Trump would ever become president, Strzok replied, “No. No he won’t. We’ll stop it.”

Interestingly, in the text messages, Strzok also said he was hesitant to join Mueller’s Russian investigation because of his “gut sense” that there was “no big there there.” Indeed, to this day, Mueller has not found even a shred of evidence of a Trump-Russian collusion.

On July 12, 2018, an arrogant Strzok testified at an extraordinary congressional hearing, described by the AP as “chaotic” and “devolved into shouting matches”. Strzok brazenly denied that the personal beliefs expressed in his text messages, including his “We’ll stop Trump” vow, had affected his work for the FBI in any way or that he and the FBI “would take any action whatsoever to improperly impact the electoral process for any candidate.” Cynically waving the flag, Strzok accused Congress’ investigation into him as misguided and playing into “our enemies’ campaign to tear America apart.”

Aside from Strzok’s wholly self-serving and downright unbelievable testimony, what is really disturbing about the hearing is his appearance and demeanor.

There’s no other word for it: Strzok looked possessed, with evil eyes and horns sprouting above his eyebrows.

But it’s not just the evil eyes and devil’s horns.

Strzok also did this really, really strange wiggle during the Congressional hearing:

In a tweet on July 12, conservative actor James Wood reminds us that Hillary Clinton, too, wiggled like Peter Strzok: “Great snakes writhe alike…”