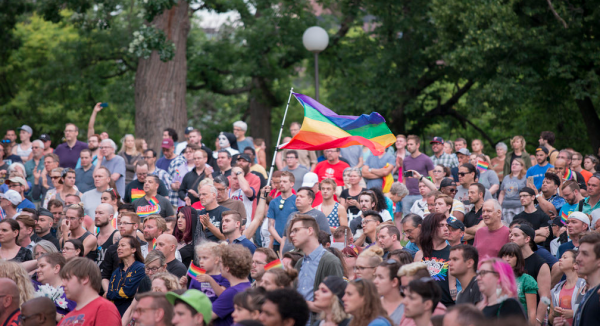 (Natural News) Trouble is brewing in LGBTville where some of the community’s earliest members, the “Ls,” are struggling to maintain the attention spotlight amid growing numbers of newer members that they perceive as an existential threat – mainly the “Ts.”

According to reports, a group of angry lesbians disrupted the recent “Pride” event in London over this very issue, complaining about how the continued influx of transexuals into the LGBT movement is rapidly making them obsolete.

More specifically, it’s biological men who decide to transform themselves into “women” that are really ruffling the feathers of these homosexual females, some of whom are demanding that the T be removed from the LGBT acronym.

“A man who says he’s a lesbian is a rapist,” one of the lesbians screamed as she was hauled away by law enforcement officers trying to keep the peace.

The phrases “Transactivism erases lesbians” and “Lesbian = Female Homosexual” were also seen on large banners held up by the other seven lesbians who were reportedly present at the disruption incident, which was carefully planned for maximum impact along the parade route.

Several other lesbian groups were also present at the event to raise hell over the presence of transgenders. Members of “Get The L Out,” “Object,” “Mayday 4 Women,” “Critical Sisters,” and “Lesbian Rights Alliance” reportedly handed out pamphlets along the parade route emphasizing the ways in which lesbians are feeling marginalized by transgenders.

“The trans movement is … coercing lesbians to have sex with men,” read one of the pamphlets. “We firmly condemn this vicious form of anti-lesbianism disguised as progress.”

Speaking to reporters, one of the lesbians handing out these pamphlets actually tried to make the case that transgenderism, which is a personal choice, represents a type of “conversion therapy.”

“Conversion therapy is wrong,” this deranged individual stated, implying that transgenders are somehow being forced to pretend as though they’re the opposite biological sex.

“Only women can be lesbians,” this individual firmly stated, discriminating against transgenders in the process. “A man who has surgery can never be a lesbian.”

But wait: Aren’t LGBT people allowed to self-identify as whoever or whatever they want, no questions asked? That’s long been a key tenet of LGBT philosophy and dogma, after all – the idea that a person can choose to be anything he, she, ze, it, etc. wants without having to face any discrimination.

This glamorized banner of “tolerance” worked pretty well when gays and lesbians were still the center of attention in LGBTland. But now that transgenders are stealing the LGBT spotlight, these older relics of sexual deviancy are demanding that their former positions in the rainbow hierarchy be restored – which isn’t likely to happen anytime soon.

“The incident is the latest in a string of clashes between activists who demand all sexes, genders, and sexual preferences be included under the LGBTQIA+ banner, and those who say they’re left feeling marginalized by gay rights groups’ shifting priorities,” writes Emily Zanotti for The Daily Wire.

“The lesbian activists who disrupted the parade said they’ve felt left out of Pride events this year, after noting to organizers that lesbians prefer sex with only biological females, not transgender men who might dress and live as women but who have not completed gender reassignment surgery.”

It’s hypocrisy at its finest – and the rotting fruit of Obama’s aggressive LGBT agenda during his tenure in the White House. The irony is that 44’s pro-trans push seems to have become the lynchpin that’s on the verge of setting off the LGBT grenade, leading to the movement’s total self-destruction.

For more news about the implosion of the left, check out Libtards.news.