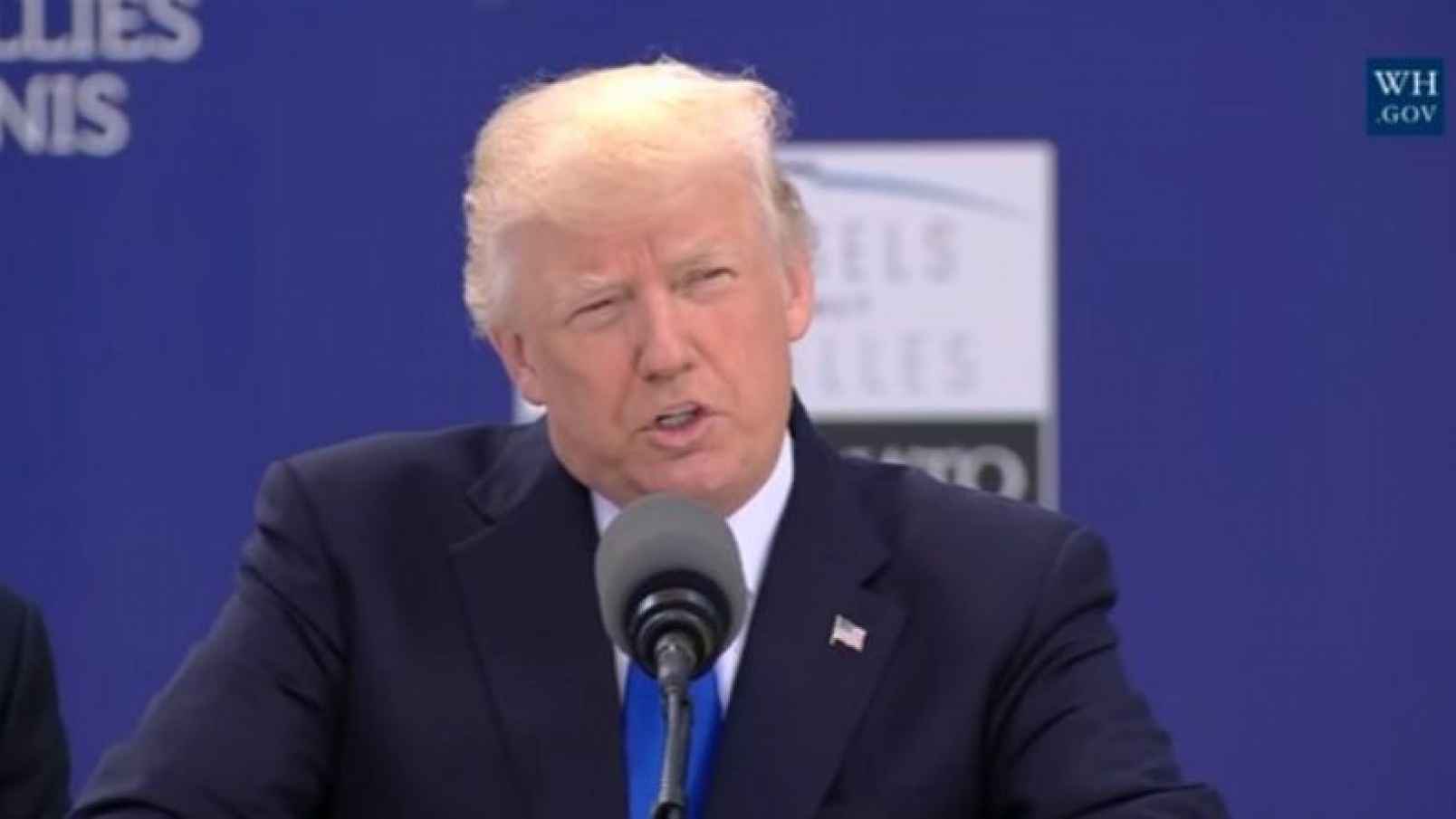 A protester waved a, “Everyone welcome” sign outside Blenheim Palace as President Trump arrived to attend a reception with Prime Minister May.

She didn’t mean Trump. Everyone but Trump was welcome in the United Kingdom.

The angry woman was part of a furious leftist mob that had hounded the President of the United States from his landing at Stansted Airport to his flight to Winfield House to the trip to Blenheim.

A desperate marketing firm had paid the owner of Moat Farm in Stoke Mandeville, who has no opinion on Trump, to allow a 650 foot crop circle reading “F___ Trump” in Russian on his flight path.

And that wasn’t even the most desperate leftist protest stunt by the angry babies of socialism.

Pots and pans were banged outside Winfield House, the United States ambassador’s residence, at Blenheim a sign accused Trump of being the “World’s #1 Racist” and Amnesty International hung up a giant banner calling him a “Human Rights Nightmare” in an equally nightmarish yellow font.

Momentum, the anti-Semitic left-wing hate group, Stop the War’s Trotskyists, the UK version of the pro-Farrakhan racist Women’s March, and the freeloaders of the Trades Union Congress will be part of a London mob of an estimated 50,000 preparing to protest President Trump’s existence.

While the leftist mobs have been unleashed, pro-Trump protesters were leashed. A handful of supporters stood outside Blenheim Palace. One wore a clearly homemade “Britain Loves Trump” sign. The scrawled shapeless heart was in sharp contrast to the professionally designed and mass produced “Dump Trump” signs waved by grim-faced leftists on the verge of breaking into Labour’s, “The Red Flag.”

“The People’s Flag is deepest red,” the white wine radicals who have never worked a day may start to sing in London. “Though cowards flinch and traitors sneer/We’ll keep the red flag flying here.”

The red flag is welcome, the British flag isn’t. Welcome Trump marchers and the Free Tommy supporters of imprisoned Jihad critic Tommy Robinson have been slapped with the Public Order Act.

The anti-Trump marchers are a minority machine of massive lefty groups and internationally famous QUANGOs while the handful of pro-Trump supporters speak for a silent majority that is losing its country. And to them, Trump, like Brexit, represents the will of the people against the powerful elites.

The intersection between Trump and Brexit has always been a powerful one.

Brexit and Trump were both dismissed as marginal extremism by the media, but had the support of the people. The elites have struck back by accusing both Trump and Brexit of Russian conspiracy theories. The real sin of both the big ‘T’ and the big ‘B’ is that they reverse the leftist course of history which is meant to run away from nations and into mass borderless conglomerations like the EU or NAFTA.

As Prime Minister May stands accused of betraying Brexit, Trump’s visit is an unwelcome reminder that it is possible for leaders to listen to the people, instead of to the smart set and its media monarchies.

President Trump has been accused of attacking Europe by challenging the usefulness and legitimacy of outmoded international groupings like the EU and NATO. But he isn’t attacking Europe; he’s liberating it from its dogmas and bureaucracies, from red flag waving QUANGOs and mandatory government media.

The transatlantic relationship had fossilized into an arrangement where American firepower protected European socialism and the American economy financed European international organizations. The WTO, the IMF and the World Bank were built on the backs of American workers. The multi obsessions of Europe’s leftist elites were embraced by Democrats from FDR to JFK, from Clinton to Obama.

Europe got a free ride, but its individual nations, with the exception of Germany, lost out. Industries collapsed, jobs vanished and the welfare states only bred malaise and misery. By the time the wholesale Islamic invasion of Europe was underway, its working class cities and towns were even worse off than their American Rust Belt counterparts while their farmers had been reduced to tourist attractions.

The pro-Trump marchers come from the same working class as Tommy Robinson. They’re worlds away from the angry students working on degrees in ethnoecology and waving mass produced placards.  The two Britains that collided over Brexit are clashing once again over Trump. One is the borderless Britain of the QUANGO, the transnational red flag and the Muslim migrant. The other is fighting for its life.

Trump is a powerful symbol of people power. And that symbol raises fear and hope in the UK.

People power has largely died out in Europe. It has come to mean lefty toffs pretending to be working class while protesting for higher fees on the middle class to fund bigger subsidies for themselves. It’s luvvies pushing fake social media campaigns for more diversity on the BBC. It’s Jeremy Corbyn dazedly stumbling between terrorist rallies and student radical meetings. But that’s not people power. Trump is.

And that is what terrifies European elites.

The EU is beleaguered by a tide of populists rising against the perfect storm of mass migration and Eurocratic rule. Some of these populists are phonies, frauds and hacks. But others are real. In times past, it was fashionable to dismiss them as irrelevant cranks. But now one is the leader of the free world.

As Trump continues his odyssey, his presence gives hope to the oppressed citizens of Europe.

Trump haters in the UK and America aren’t protesting a man, but an idea. The Beast, the massive presidential limo, rolling through the streets has a new master. And the right side of history no longer points its compass needle to multinational organizations and useless university degrees. As Marine One flies over Britain while red-faced reds scream futile insults at the sky, carve obscene crop circles, and beat pots and pans in the street, they know that an unstoppable wave of change is breaking over Britain.

Despite what Bernie Sanders will tell you, socialism has failed in Europe. Its blight isn’t as obvious to American tourists as it is in Cuba, Venezuela or North Korea, but it has, to paraphrase Thatcher, taken the socialists of London, Berlin and Brussels longer to run out of other people’s money.

And the other people’s money includes American money.

Americans can no longer subsidize the social experiments of socialism or fund European organizations that the Euros won’t pay for out of some misguided sense of multilateral manifest destiny.

This isn’t an insult. It’s an opportunity.

The European nation-state, once the backbone of western civilization, cannot rise again as long as it’s dependent on the United States. The cycle of dependency and loathing expressed at its best and worst between the US and the UK is dysfunctional and cannot last. Trump’s message is that it’s ending.

A nation cannot respect itself or respect others until it is independent of them. Brexit is the first step, but not the last, to the rebirth of the Britain whose new day will light a fresh blaze of national glories.

The media has made much of the ‘Angry Baby’ anti-Trump balloon to be flown over London.

The real angry babies though won’t be found riding in the Beast. The angry babies are the fuming protesters, perpetual students protesting austerity, furious union workers who never work, government activists and retired leftists recapturing radical nostalgia, all fearful of the responsibilities of freedom.

The angry babies will follow Trump across Britain. They will miss as much work as it takes. Leaping up and down, they will howl as Air Force One takes off leaving the angry socialist babies behind.