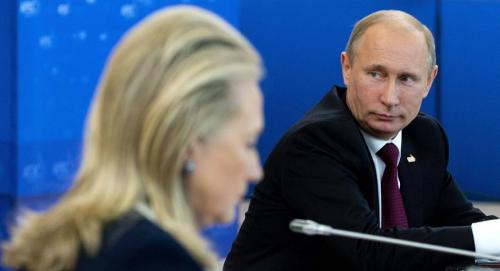 Putin dropped a bombshell on Monday in Helsinki. He claims approximately $400 million in illegally earned profits was funneled to the Clinton campaign by associates of American-born British financier Bill Browder.

Browder made millions in the 90s as one of the largest foreign portfolio investors in Russia before being sentenced to 9 years in prison for tax fraud.

Putin accused Browder and his associates of illegally earning over than $1.5 billion without paying Russian taxes, before sharing $400 million of those profits with Clinton.

Upon offering to allow Robert Mueller’s team into Russia to investigate and asking for Russian Intelligence to gain a reciprocal arrangement to do their own investigations in the U.S,, Putin dropped his bombshell.

Putin remarked, “For instance, we can bring up Mr. Browder, in this particular case. Business associates of Mr. Browder have earned over $1.5 billion in Russia and never paid any taxes neither in Russia or the United States and yet the money escaped the country. They were transferred to the United States. They sent [a] huge amount of money, $400,000,000, as a contribution to the campaign of Hillary Clinton.  Well that’s their personal case.”

He continued, “It might have been legal, the contribution itself but the way the money was earned was illegal.  So we have solid reason to believe that some [US] intelligence officers accompanied and guided these transactions.  So we have an interest in questioning them.”

Browder claims Russia seized money for taxes he had already paid. The following is from his bio at BillBrowder.com:

Bill Browder is the founder and CEO of Hermitage Capital Management, which was the investment adviser to the largest foreign investment fund in Russia until 2005, when Bill was denied entry to the country and declared a “threat to national security” as a result of his battle against corporate corruption.

Following his expulsion, the Russian authorities raided his offices, seized Hermitage Fund’s investment companies and used them to steal $230 million of taxes that the companies had previously paid. When Browder’s lawyer, Sergei Magnitsky, investigated the crime, he was arrested by the same officers he implicated, tortured for 358 days, and killed in custody at the age of 37 in November 2009.

According to Zero Hedge:

Browder is notoriously the man behind the 2012 Magnitsky Act, which exploited Congressional willingness to demonize Russia and has done so much to poison relations between Washington and Moscow. The Act sanctioned individual Russian officials, which Moscow has rightly seen as unwarranted interference in the operation of its judicial system.

Browder, a media favorite who self-promotes as “Putin’s enemy #1,” portrays himself as a selfless human rights advocate, but is he? He has used his fortune to threaten lawsuits for anyone who challenges his version of events, effectively silencing many critics. He claims that his accountant Sergei Magnitsky was a crusading “lawyer” who discovered a $230 million tax-fraud scheme that involved the Browder business interest Hermitage Capital but was, in fact, engineered by corrupt Russian police officers who arrested Magnitsky and enabled his death in a Russian jail.

Many have been skeptical of the Browder narrative, suspecting that the fraud was in fact concocted by Browder and his accountant Magnitsky. A Russian court recently supported that alternative narrative, ruling in late December that Browder had deliberately bankrupted his company and engaged in tax evasion. He was sentenced to nine years prison in absentia.

Putin shouldn’t be easily trusted either.

After all, why would he throw Hillary Clinton under the bus after all she has done for Russia?

Did she sell him some bad uranium or something?

Let’s not forget the Uranium One scandal and Moscow funneling millions to the Clinton Global Initiative.

So is Vladimir Putin telling the truth?

Did Browder and his associates find a way to funnel $400 million into Clinton’s campaign with the help of American Intelligence Agents?

Would it surprise anyone if Putin’s claims are true?