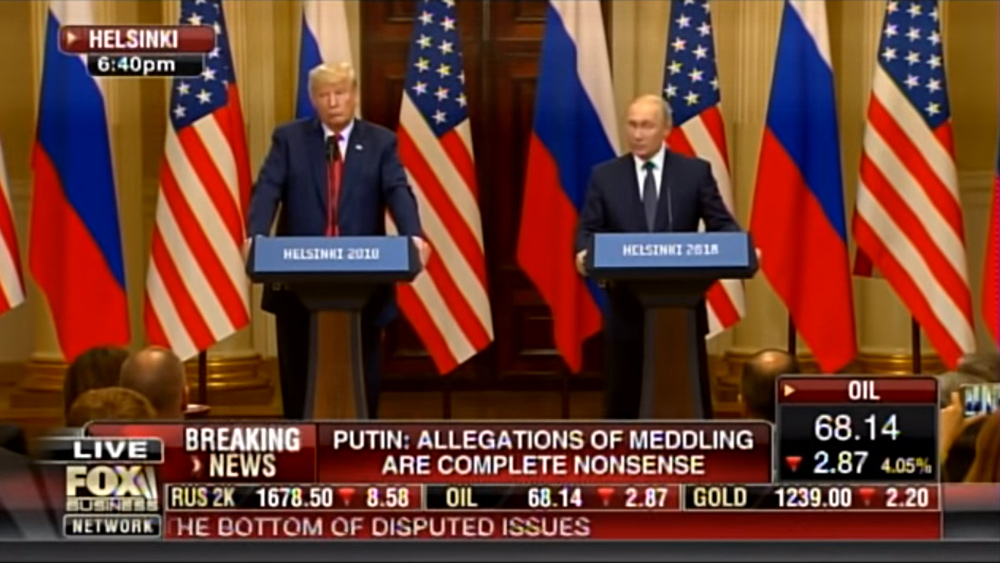 (Natural News) The faux outrage now being heavily pushed by the media monopolists is a brazen attempt to distract from the “political bombshell of the century” that Russia’s President Vladimir Putin dropped yesterday. A Russia-linked business mogul sent $400K to the Hillary Clinton campaign, and the money was “laundered” by U.S. intelligence officials working for Obama, said Putin. (UPDATE: Russian Tass news is now reporting that the originally reported $400 million was a mis-translation.)

The permanently-hysterical left-wing media has since been trying to desperately distract the public from this stunning revelation by wildly accusing Trump of “treason” for merely talking to Putin while seeking peace rather than nuclear war. At the same time, left-wing media outlets utterly refuse to report the actual words of Putin, who dropped this $400K bombshell on Hillary Clinton:

For instance, we can bring up Mr. Browder, in this particular case.  Business associates of Mr. Browder have earned over $1.5 billion in Russia and never paid any taxes neither in Russia or the United States and yet the money escaped the country. They were transferred to the United States. They sent [a] huge amount of money, $400,000 as a contribution to the campaign of Hillary Clinton.  Well that’s their personal case.  It might have been legal, the contribution itself but the way the money was earned was illegal.  So we have solid reason to believe that some [US] intelligence officers accompanied and guided these transactions.  So we have an interest in questioning them.

The upshot of this situation is that Putin may not only possess damning information that could lead to the arrest of Barack Obama and Hillary Clinton, he may have already given this information to President Trump.

“So why are the Democrats, the Deep State and the MSM so petrified of President Trump meeting with Putin?  The answer is because they are deathly afraid of not what Putin might tell Trump but what evidence Putin might have that would indict their leaders in prior criminal actions,” reports The Gateway Pundit. “The Democrats, the MSM and Deep State are in a complete panic! Obama gang members came out of hiding and screamed with fear over what Trump may have learned from Putin, so much so that they claimed President Trump should be impeached.”

As TGP explains, the house of cards is starting to come down around the Obama deep state cabal, and Leftists are going insane trying to distract America from the inevitable truth that many Obama-era operatives are likely going to end up in prison:

The Deep State and the Democrats are terrified of what Putin may have provided Trump.  They all knew for some time that they were the ones that colluded with Russia and they were the ones vulnerable as a result.  Their days are now numbered and they know it.

Today the narrative again shifted.  The talk by the end of the day was about Obama.  He was implicated in the Russia scandal by Lisa Page.  More texts were released showing Obama’s connections to the scandal.  Others in the news began speaking of Obama being involved in Russiagate and the President noted on Hannity that corrupt FBI agent Strzok reported ultimately to Obama.

President Trump knows some things that he is not yet letting out of the bag and as a result the Deep State is in a panic never seen before.

Read more at The Gateway Pundit.