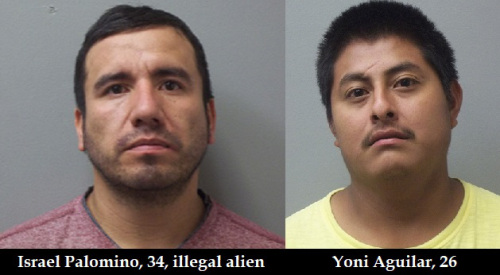 Mexico’s drug-cartel beheadings have come to America — brought to you by the illegals-indulgent pro-“sanctuary” Democratic Party.

Sinaloa Cartel is a Mexican crime syndicate and the most active drug cartel involved in smuggling illicit drugs, primarily of cocaine, heroin, methamphetamine, marijuana and MDMA, into and throughout the United States.

Two Sinaloa Cartel members, one of whom is an illegal alien, decapitated a 13-year-old autistic girl because she had witnessed the two men assaulting her grandmother with a knife and leaving her to die in a cemetery:

On June 2, 2018, Palomino, Aguilar, Mendoza and another woman went to pick up a quarter kilo of methamphetamine in Norcross, Georgia, a small city northeast of Atlanta.

Something apparently went wrong during the trip. During the early morning hours of June 4, the two men woke Mendoza in her Huntsville home and drove Mendoza and her 13-year-old granddaughter to a cemetery in Madison County, Alabama. According to Aguilar, who was Mendoza’s live-in boyfriend, an argument about the drug buy between Mendoza and Palomino escalated. Palomino stabbed Mendoza multiple times with a knife, and the two men left the woman to die on the ground in the cemetery.

Since the granddaughter had witnessed the killing, the men took the girl to a secluded wooded area about 2½ miles from the cemetery where, according to Aguilar, Palomino forced him to behead the girl. Aguilar told investigators he was holding the knife when Palomino came up to him and moved his arm back and forth in a sawing motion. Aguilar said he was fearful of Palomino.

Three days later, on June 7, a farm boy found Lopez’s decapitated body. Less than 30 minutes after the sheriff’s office released to local press a description of the girl’s clothes and that she had a cerebral shunt, a woman showed up at sheriff’s headquarters. Identifying herself as the mother of Mariah Lopez and the daughter of Oralia Mendoza, the woman said the body might be that of Lopez. Dental records provided a positive identification a week later. By then, Aguilar and Palomino were in custody.

After Aguilar confessed, authorities found Mendoza’s body at the cemetery on June 15. Aguilar and Palomino’s cellphones pinged in the area during the time of the killings, placing them in the cemetery. Investigators also recovered two knives, believed to be the murder weapons: one was found under Aguilar’s mattress; the other was under Palomino’s mattress. Additionally, blood was found inside Palomino’s car.

Israel Palomino, 34, and Yoni Aguilar, 26, are charged with two counts each of capital murder in the slayings of Mendoza and Lopez. District Judge Claude Hundley ruled prosecutors have enough evidence to send the case to a grand jury. Both men are being held without bail in the Madison County Jail.