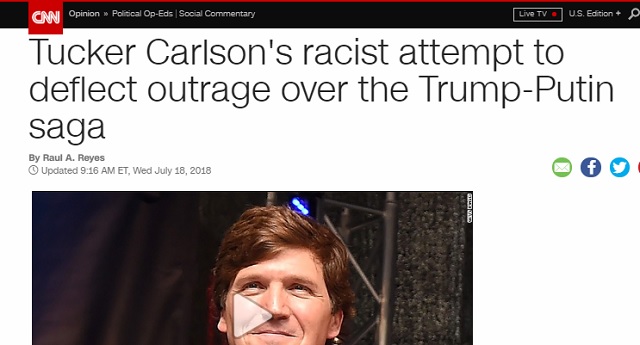 CNN’s Raul Reyes attacked Fox News’ Tucker Carlson as a “racist” for highlighting Mexico’s interference in US elections, but he himself has written column after column highlighting the same “interference” as a positive.

When in doubt, blame brown people. That’s what one leading voice on the right is doing in response to the fallout over President Donald Trump’s disastrous summit with Vladimir Putin in Helsinki, Finland.

In an interview with “The Five,” Fox News host Tucker Carlson said that Russia had sought to meddle in US affairs. But he asserted that other countries, such as Mexico, have been more successful in doing so. “I don’t think Russia is our close friend or anything like that. I think of course they try to interfere in our affairs. They have for a long time. Many countries do. Some more successfully than Russia, like Mexico, which is routinely interfering in our elections by packing our electorate.”

[…]That this brand of racism is still alive and well speaks volumes about the state of conservative thought in the age of Trump. American citizens of Hispanic descent who are voting are participating in democracy. And for the record, there is no evidence to support Carlson’s claims.

Besides being false, Carlson’s comments are insidious because they go back to the tired trope of “illegals” being somehow responsible for everything that ails America, from social ills to violent crime. […]

It is telling that Carlson made his comments about Mexico influencing our elections without citing any data to back it up.

Just two days before Reyes column came out, he shared an article on Twitter highlighting how Arizona could soon turn blue due to its expanding “Latino electorate.”

You literally just tweeted two days ago about how Arizona is going to turn blue due to its expanding "Latino electorate." https://t.co/PuEeia6ZEX pic.twitter.com/VsXteZySCT

Reyes also wrote a column in 2016 highlighting how “non-citizen Latinos” could “help decide the outcome of the upcoming presidential election.”

In 2012, he wrote a column saying Latinos “may lead the way to gun control in the future” as “our numbers continue to grow.” What Tucker Carlson said was absolutely correct. Reyes’ own columns are proof enough.