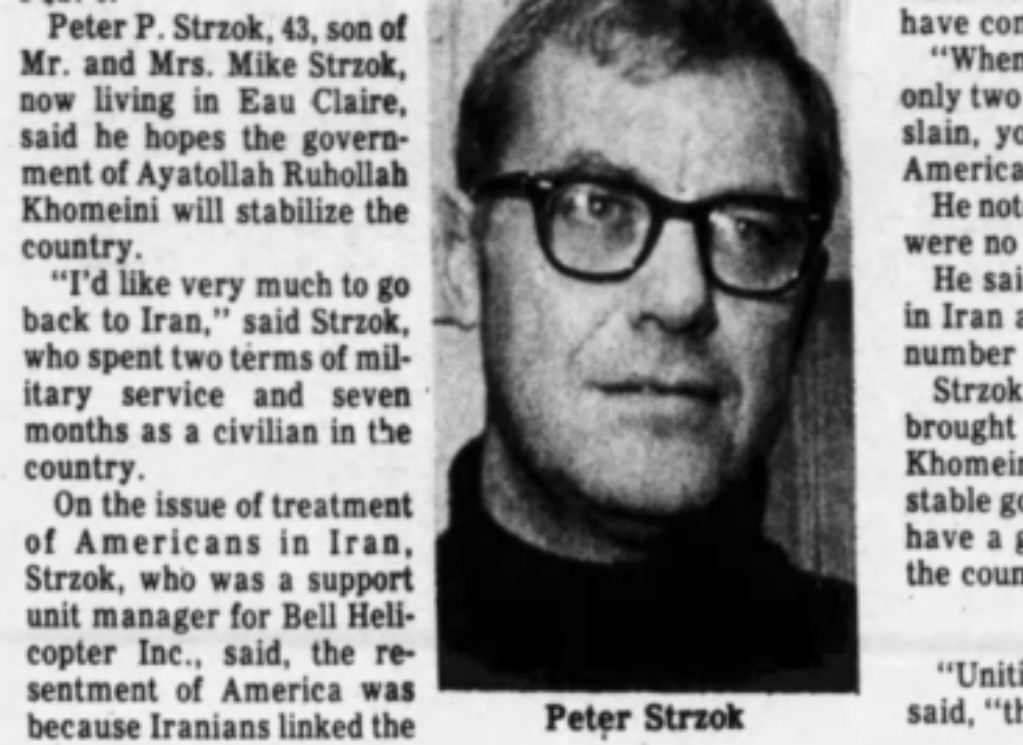 If this is true, why doesn’t anybody talk about the Iranian takeover of our government, between this arrogant FBI hatchet man and Valerie Jarrett?

And we are finally noticing a Russian threat — years after people on the Right were ridiculed for concerns about socialism and Communism by the left-leaning media and Democrats who loved socialism, Communism, and the Soviet Union.

At a time when Russian moles were actually infiltrating and running things, the left didn’t care.

Today, when Russia is substantially diminished, they’re hysterical about a Russian threat.

And now when there is a real Iranian threat, they’re ignoring that one.

A former co-worker of Peter Strzok tells Big League Politics about Strzok’s extensive background in the intelligence community, including the fact that he grew up in Iran. Many intelligence officers like Strzok are complete ghosts with questionable history and gaps in their life story. But now we have some insight.

Peter Strzok was born in the late 1960’s – he attended the American School in Iran up until 1978 when it closed down and then he attended the American School in Saudi Arabia. He supposedly attended a Catholic School, St. John’s Prep in Minneapolis (the school refused to confirm or deny attendance) and then completed a Bachelors at Georgetown and some form of graduate degree after that.

The truth is that after Peter Strzok III turned 18 his life is arcane, which is the usual story of many like him. Did you know that Peter Strzok II (Strzok’s father) and Hillary Clinton have a lot in common? It turns out after advocating for Khomeni in Iran and then working in Saudi Arabia to calm the waters of an Iranian government (appeasing them with anti-Semitic rhetoric), Strzok’s father Strzok II also dabbled in “charity work.” Strzok’s father was involved in so-called charity work in Haiti but also helped dismantle and reassemble Upper Volta..now known as Burkina Faso.

Despite Deep State efforts to scrub information, the Internet is forever. Below you will see a very controversial happening in the early Eighties. Peter Strzok II (Strzok’s father, also known as Peter Strzok Sr.) was an employee of Catholic Relief Services and was interviewed by the New York Times in 1985 over his testimony or statements regarding mishandling money intended for Ethopia. In the article he identifies himself as a former employee of the charity and he is a retired US Army Corps Engineer who served the agency in Africa and Haiti. So Peter Strzok II worked in Haiti with a charity? That sounds eerily familiar. Can we all guess which charities partnered to help Haiti?

The Clinton Foundation and The Catholic Relief Services (CRS) seem to work in tangent. Coincidence? Peter Strzok Sr. was actually the director of CRS in Haiti. If we look into CRS financials they seem to overlap and feed into Clinton Global initiatives and balance sheets.

In the early 80’s Upper Volta was in turmoil. It is said that mineral disputes with neighboring countries brought about great duress and so in 1985 the country of Upper Volta ceased to exist and was then named Burkina Faso during Strzok II’s term there. Specifically, in 1981 he was advised of a government visit to Upper Volta, which places him in Upper Volta for a period of 4 years as his son Strzok III was at the American School in Saudi Arabia from 1978- 1980. This happened after their sudden move from Tehran when Khomeni attained power over the Shah. Looks like whenever there is a regime change in modern history a Strzok is lying in the shadows waiting.

We know Peter Strzok III, the man who sent those vile text messages about our President. The man who was biased and wanted to ensure a Clinton Presidency was raised in Iran and Saudi Arabia.

Our source reveals how Strzok and his father both talked about Iran favorably and both accidently reminisced about the rose water smell of the ju-jeh kebab by Shemiran Hill… something that disappeared after 1987 and only those who are old enough to remember can discuss.

Our insider tells us that Peter Strzok III is the key Middle Eastern Intel operative for the Iranian airline Mahan Air’s purchase of United States government planes during the Obama administration from 2011 to 2013 (when Iran sanctions were in place). He handled the Iranian relations from start to finish. Just like his father did for Reagan and just like he’s been doing for years under cloak and dagger says the BLP insider.

Peter Strzok Sr. and of course John O. Brennan were involved with Iran. In fact, our source tells us that Strzok Sr. was involved in the Iran-Contra scheme that led to a six-month prison term for Reagan national security adviser John Poindexter. Back in the Eighties, the government was just as corrupt as it is today and for some reason ,we keep giving weapons, planes, and planes full of money to Iran. Even Barack Hussein Obama sent money to Iran on a plane in his last year of office — $1.4 Billion worth. Just a few weeks ago, Iran demanded Germany send them 300,000 Euros in cash on a plane to them, and of course ,Angela Merkel complied. What’s the deal with Iran? Why are they so important?

Here is a clipping from the Wisconsin-based Leader-Telegram newspaper from 1979 in which Strzok Sr. describes his activities in Iran and expresses goodwill for the Ayatollah.

What were Strzok, Brennan, and Obama really doing? That is a very good question that maybe President Trump can get answered for us if a Summit with Iran can happen early this fall. One thing that is constant in modern history over the last five decades with anything involving Iran: There is a Peter Paul Strzok involved…. 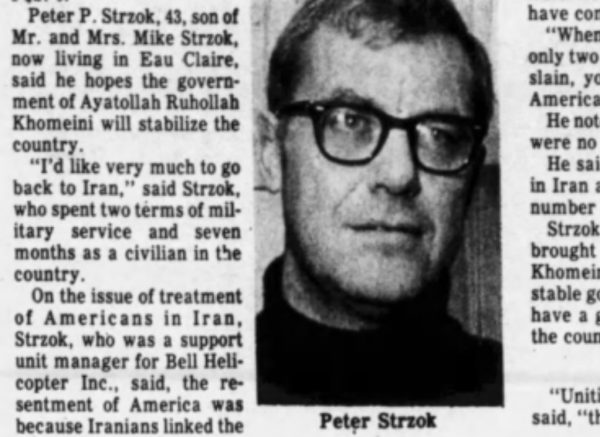