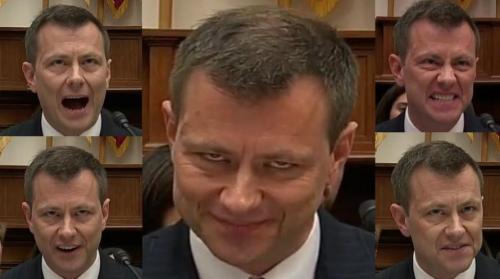 Are Democrats in a panic over Lisa Page?  The embattled former paramour of FBI investigator Peter Strzok may seek immunity in order to come clean.  She may even have a few things to say about former FBI director, James Comey.

Peter Strzok has already proven he had a strong political bias against Donald Trumpand in favor of Hillary Clinton during investigations which were supposed to be impartial. According to The Conservative Tribune, that political bias which almost certainly influenced his judgment on inquiries into both Hillary Clinton and Donald Trump could see Strzok lose his security clearance as a result.

He’s also facing difficult questions from lawmakers but chose to act morally superior during his congressional testimony. Strzok acted aloof and uncooperative as lawmakers tried to determine if FBI officials purposely tried to undermine the candidacy and then presidency of Donald Trump. But now, Strzok could be in serious trouble along with James Comey.

Strzok’s fellow FBI employee and former lover, Lisa Page may have a chance to cooperate with lawmakers, tossing her Strzok and Comey under the bus in exchange for immunity. Some experts, including Chris Farrell of Judicial Watch, believe Page may be willing to cut a deal that gives her leeway to speak freely about what went on behind the FBI’s doors.

“Well, I think Page has the opportunity to become the anti-Strzok,” Farrell explained during a Monday appearance on Fox Business Network’s “Lou Dobbs Tonight.”  He added, “She’s going to look for an immunity deal, or at least being treated as a cooperating witness. She’s seen from last week what her boyfriend was doing, and she’s probably a pretty sharp attorney. She sees an opportunity or an opening to kind of recast herself, and I think she’s taking advantage of it.” And Farrell could prove to be correct.

Page already has spoken to several members of Congress regarding the FBI scandal, and while those discussions were not public, some participants have hinted that the FBI attorney was indeed more forthcoming than Strzok. For example, Republican Representative Mark Meadows of North Carolina told reporters on Friday that Page’s “willingness to cooperate today speaks well of her.” Another Republican lawmaker, Representative John Ratcliffe of Texas, echoed that tone. Ratcliffe also said he believes Page is “a very forthcoming witness.”

Should Page decide to divulge the so far unknown details of this scandal, it could spell trouble for the Democrats pulling the strings.