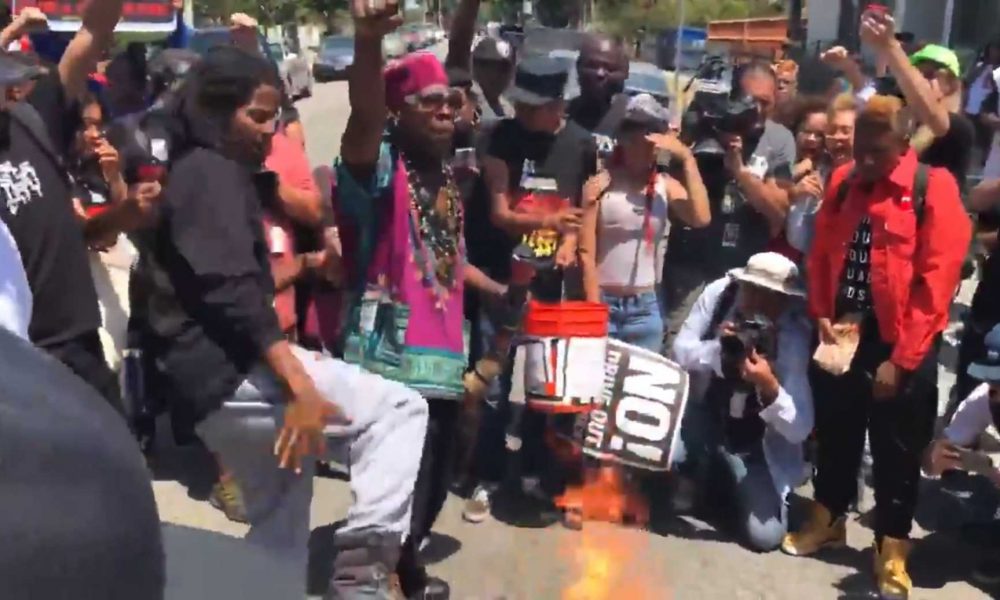 This is the modern Democratic Party.

Maxine Waters supporters set fire to the American flag outside the Democratic firebrand’s Los Angeles office Thursday as way to counter an anticipated protest by a far-right militia group who never showed.

A modest few dozen people made their rebellious appearance despite a previous request by the congresswoman that supporters not be baited into confrontation with the Oath Keepers.

Shocking photographs captured outside the field office show the crowd stomping on the flag before circling around the stars and stripes as they cheer when it erupts into flames.

The Democratic counter protesters were heard chanting as they shouted: ‘This is not the American flag, this is their flag.’

The group had been shouting a slew of other slogans such as ‘black power’ and ‘Resist!’

Signs read things such as: ‘Don’t mess with our Queen Maxine,’ ‘We support you Maxine our congresswoman’ as well as ‘Trump/Pence must go!’ and ‘Deport Trump.’

Here’s video of the flag burning and “black power” chanting from ABC 7:

There was no protest outside Maxine Waters office today. A group called #oathkeepers did not show up. Some counter protestors who came to support Waters burned an American flag in the street. #maxinewaters #flagburning #flag pic.twitter.com/pafH7nJrWL

No Oath Keepers here. The anti-government group planned to protest outside of Rep. Maxine Waters’s office because she urged the public to “push back” against Trump officials in public. But after dozens of counter-protesters arrived, they didn’t show. ⁦@KPCC⁩ ⁦@LAist⁩ pic.twitter.com/PVL3m6EsoO

An anti-government militia protest outside Rep. Maxine Waters’ office was canceled after pro-ICE group the Oath Keepers failed to show up. Counter-protesters were on hand to support Waters, even after she asked them to stay away in case of violence. pic.twitter.com/d8NC1IWKns

Though Queen Maxine’s supporters burned the American flag, they had no such issue with the Pan-African flag, which they waved proudly.