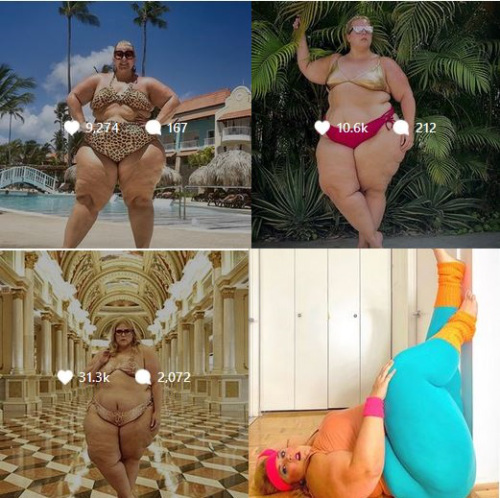 An important concept in feminism is the “objectification” of women — dehumanizing a woman by treating her as a commodity or object of sexual desire, without regard to her personhood or dignity.

A morbidly obese feminist named Anna O’Brien objectifies herself by posing in a bikini in New York’s Times Square. Then she complains that she is being objectified.

Amanda Prestigiacomo reports for The Daily Wire that on July 2, 2018, feminist activist and author Anna O’Brien decided to strip down to a bikini and pose in the middle of busy Times Square to prove . . . . “Well, the purpose of the stunt isn’t entirely clear,” but now O’Brien is fiery mad because some men in Times Square sexually objectified her.

“Yesterday I did the scariest thing I have done in my 30+ years…. I stood in times square in a bikini and posed for a photo shoot. In the beginning I felt really overwhelmed. Not because I was mocked, but because I was so extremely sexualized by a few men who were watching.”

Times Square isn’t the only public place O’Brien had posed in. Here are some other pics of her in a bikini, and a bonus pic of her in exercise clothes, from her Instagram account:

Apparently, the new wave of feminism is Fat Pride — being proud of being obese. See:

There is nothing “empowering” in being obese. Simply put, obesity is unhealthy and life-threatening.

Extra weight takes a huge toll on health, increasing the risk of type 2 diabetes, heart disease, stroke, many types of cancer, sleep apnea and other debilitating and chronic illnesses. Obesity also increases the risk of senile dementia and reduces life expectancy by 6 to 7 years.

The CDC estimates that medical-related costs of obesity may be as high as $147 billion a year, or roughly 9% of medical expenditures. An obese person costs an average of $1,400 more in medical expenses a year than someone who is at a healthy weight. Other researchers have estimated the costs may be even higher.