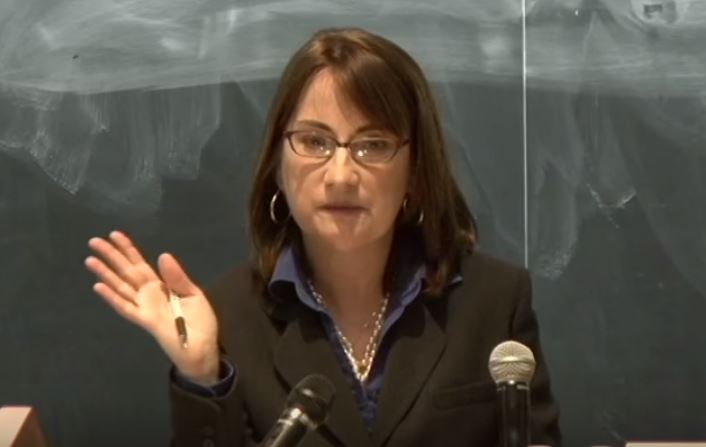 The Left are now breaking into people’s apartments.

On July 6, 2018, the New York Times‘ editorial board published an editorialcalling on Democrats and progressives to go to war against President Trump by deploying unscrupulous mafia tactics.

Landrum and a house guest have filed a police report after the house guest witnessed Stephanie Saul inside Landrum’s apartment on July 18 at 2:15 PM. Landrum was at work at the time and not in the apartment. He does not know Stephanie Saul.

Bell Stonebridge Apartments is a secured facility, access to which requires a key fob. Non-residents are not allowed in the apartment building without consent. The apartment building’s office reported that Stephanie Saul had asked about Landrum at the front desk, saying she was trying to find him and that he did not answer his door when she knocked. The office said that they did not allow Saul into the building, and they do not know how she entered the building.

The intruder said, “Is Brian here? I need to ask some questions.”

The houseguest replied, “No, he’s not here. He’s at work.”

The intruder said, “I’m looking for Landrum,” and that she wanted to talk to Brian Landrum and asked when he would be home.

The intruder said, “Can you give him this note?”

The intruder turned and left the apartment.

The houseguest did not understand what was going on. She recalls being “pretty shaken up,” and did not know how to respond.

Brian Landrum said in a statement:

“Working in politics, you become accustomed to the rough-and-tumble nature of the sport. But never in a million years could I have anticipated the New York Times sending a reporter to break into my apartment looking for a story. We’re working with police investigators, and look forward to justice being served.”

“Carlos Slim and the New York Times will stop at nothing to fight against my strong platform of supporting the rule of law, building the wall, and putting Americans ahead of big business intent on flooding our borders with low-skilled labor from the south, but I never thought they’d break into someone’s apartment. This is like Watergate, but this time it’s the press that’s breaking into private property. I knew the New York Times didn’t care much for the rule of law, but this violent behavior is blatant intimidation intended to silence conservatives.”

The Prince William County magistrate told Brian Landrum that Saul could be charged with misdemeanor unlawful entry, or potentially felony breaking and entering. Saul, who won the Pulitzer Prize in journalism for reporting on police pension fraud, did not immediately return questions for this report.