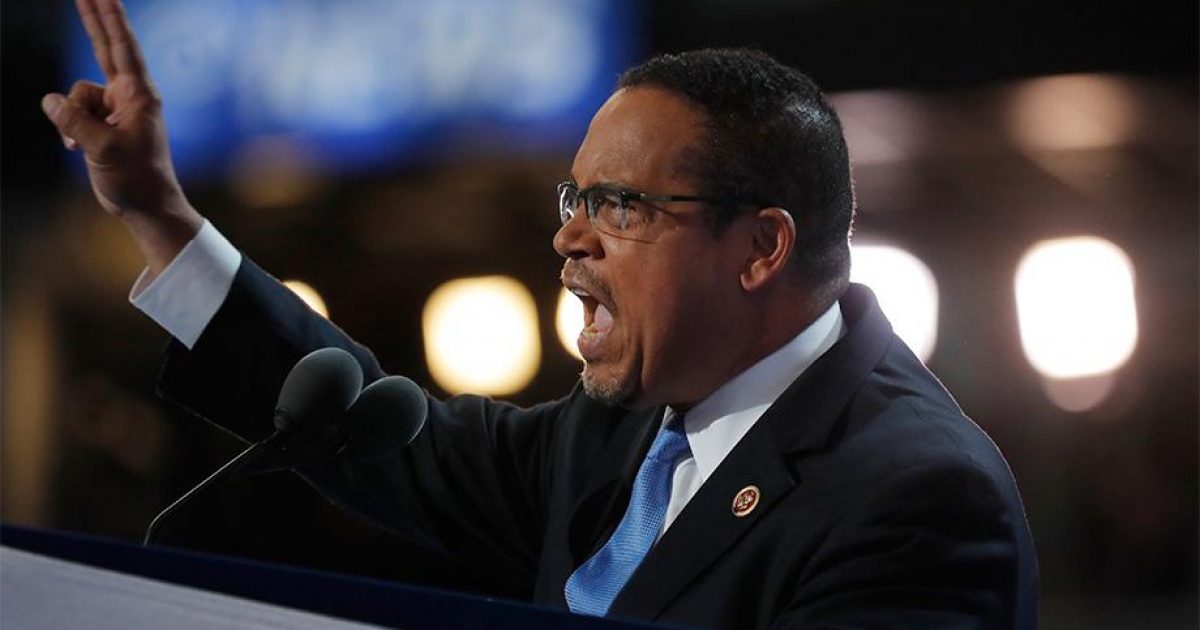 The absolute hypocrisy of the criminal-minded in our country knows no bounds and Congressman Hakim Muhammad, aka Keith Ellison, is demonstrating just that.  After being a member of the Nation of Islam, which promotes black power and racism against whites, working with anti-American, pro-Islamic groups such as the Council on American-Islamic Relations (CAIR), the Muslim American Society (MAS) and the Islamic Society of North America (ISNA), and promoting what God condemns as Vice Chair of Lesbian Homosexual Bisexual Transgender Caucus, Ellison had the audacity to demand that Amazon stop selling books and other materials that the corrupt and lying hate group known as the Southern Poverty Law Center (SPLC) have hypocritically labeled as “hate groups.”

In a letter written to Amazon CEO and CIA-tied Jeff Bezos, Ellison wrote:

“I am writing to you with my concerns about the amount of money Amazon has made from the sale of literature and music published by entities identified as ‘hate groups’ by the Southern Poverty Law Center (SPLC).”

SPLC can’t truly back up their claims of many individuals and groups that they have maligned over the years and even incite murderous intentions among their followers.  Yet, Ellison demonstrates that he wants to attack those who are innocent of the very things which he is guilty.

What Ellison is doing is nothing shy of wanting to shut down his opposition, and using his position illegally as a Congressman, he is attempting to set up the process to push for Congress to violate the First Amendment even more than it already has by writing pretended law to shut down freedom of the press and freedom of speech.  This is just the first step.

Clearly, Ellison wants Amazon, which has (with Barnes & Noble) a virtual monopoly on book sales in the U.S., to stop selling books by people designated as “hate groups” by the Southern Poverty Law Center (SPLC). Like the establishment media, Ellison assumes that the SPLC is a reliable, unbiased arbiter of what is and isn’t a hate group. The SPLC’s hard-Left bias and determination to destroy legitimate conservative groups by lumping them in with neo-Nazis and white supremacists is nowhere recognized.

The far-Left Bezos likely also thinks that the SPLC is a reliable authority, and so it is entirely possible that he will comply with Ellison’s demands and purge Amazon of all materials by people that the SPLC has smeared and defamed. Given Amazon’s dominance of the book market, that would be a serious blow to the freedom of speech, as the SPLC is making an all-out attempt to delegitimize the full spectrum of opinion that dissents from the Leftist agenda — on Islam, immigration, social issues and more. If Amazon drops SPLC-designated “hate” material, there should ensue a national discussion about whether the SPLC is really a reliable authority, and whether only one viewpoint should be allowed in the public square. If not, this will just be another nail in the coffin of the freedom of speech in the U.S.

Ellison has spoken at a convention of the Islamic Society of North America (ISNA). Yet ISNA has actually admitted its ties to Hamas, which styles itself the Palestinian arm of the Muslim Brotherhood. The Justice Department actually classified ISNA among entities “who are and/or were members of the US Muslim Brotherhood.”

Also, the Hamas-li.nked Council on American-Islamic Relations (CAIR) raised large amounts of for Ellison’s first campaign, and he has spoken at numerous CAIR events. Yet CAIR is an unindicted co-conspirator in a Hamas terror funding case — so named by the Justice Department. CAIR officials have repeatedly refused to denounce Hamas and Hizballah as terrorist groups.

By the way, you can order Spencer’s new book, The History of Jihad From Muhammad to ISIS

from Amazon (oh, the irony!), which exposes the lies that Ellison and others promote about Islam.

Daniel Greenfield also pointed out that Ellison’s idea of hate groups apply to a majority of Americans.

Ellison’s letter describes his idea of “hate groups” as having provided, “support for racist policies like the Muslim ban, and the “zero tolerance” immigration policies”. Those are mainstream policies enacted by the President of the United States and supported by the majority of Americans.

So far, Amazon has not gone to that length of censorship, but I can see that on the horizon, though I think it would impact their marketplace tremendously if word got out they were actually going to follow through on Ellison’s demands.

Here’s the entire text of Muhammad’s letter to Bezos:

I am writing to you with my concerns about the amount of money Amazon has made from the sale of literature and music published by entities identified as “hate groups” by the Southern Poverty Law Center (SPLC). I would like to know whether Amazon is committed to ceasing the sale of all products that promote hateful and racist ideologies. For a company with a policy prohibiting the sale of “products that promote or glorify hatred, violence, racial, sexual, or religious intolerance or promote organizations with such views,” there appear to be a disturbing number of groups with hateful, racist, and violent agendas making money using Amazon’s platform.

Since the election of Donald Trump, hate groups have been on the rise, and racist violence has swelled in this country. The increase in political organizing around hateful ideologies like white nationalism has provided a growing base of support for racist policies like the Muslim ban, and the “zero tolerance” immigration policies that have driven family separation. Over the last decade, hate groups have used Amazon to fund their activities and spread their ideologies. Historically, Amazon has not responded effectively to this issue, and continues to allow hate groups and SPLC-identified neo-nazis and white nationalist writers to make money using its platform.

According to a recent report entitled Delivering Hate by the Partnership for Working Families and the Action Center on Race and the Economy (ACRE), available online at https://bit.ly/2tX37yK as of June 2018, Amazon has been selling baby onesies, toys, children’s Halloween costumes, flags, clothing, and jewelry emblazoned with nazi, neo-nazi, white nationalist, anti-Semitic, Islamophobic, and violent, racist imagery. I am disturbed that Amazon would make racist and hateful products for children available on its platform.

Further, there appears to be a staggering amount of neo-nazi and white nationalist propaganda available for sale on Amazon, both in e-book and print format. For example, five volumes of the Occidental Quarterly, a racist journal edited by SPLC-identified neo-nazi Kevin MacDonald, remain for sale on Amazon. Your company states that it takes 30-65% of revenue from all Kindle e-book sales. Amazon also takes 40% of revenue from the sale of physical books published by its CreateSpace self-publishing platform. I am alarmed that hate groups can make money by selling propaganda on Amazon, and that Amazon is able to profit from these transactions.

As stated earlier, Amazon has a strict policy against hateful and racist products on its platform. The availability of all the material listed in the aforementioned report indicates to me that either Amazon is willfully refusing to enforce its own policies against the sale of racist products, or its sheer size makes it impossible for the company to police itself. In either event, Amazon must immediately cease doing business with groups that promote racist violence. To better understand how hateful propaganda makes its way to be sold on Amazon, and how your company plans to correct this problem, I seek the following information:

I respectfully request answers to my questions by July 31, 2018.