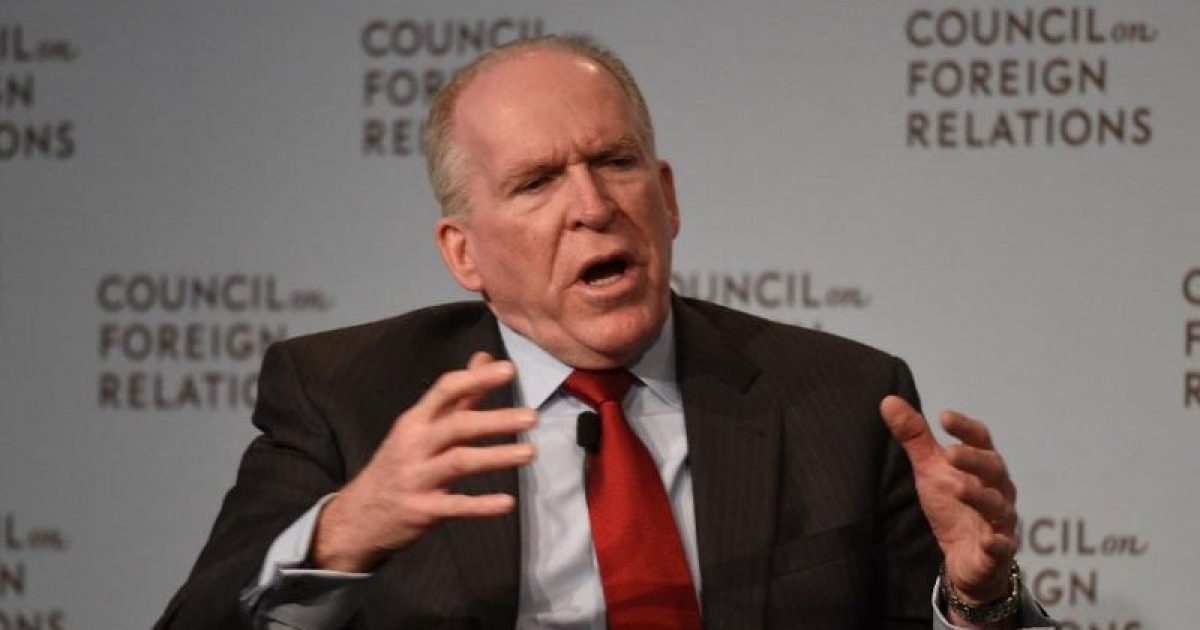 Well, Sebastian Gorka has been upfront that former Obama CIA Director John Brennan is both a “Communist” and a “traitor.”  Now, it appears that the Wall Street Journal’s Kimberley Strassel may be following that path without coming right out and saying it.

In a recent column, Strassel seems to take issue with Brennan’s tweets from earlier this week when he tore into President Donald Trump over his actions in Helsinki with Russian President Vladimir Putin.

“It was nothing short of treasonous,” added Brennan, who worked for what could be argued was the most treasonous person to sit in the Oval Office.  “Not only were Trump’s comments imbecilic, he is wholly in the pocket of Putin. Republican Patriots: Where are you???”

According to Ms. Strassel, “This is rough stuff, even for an Obama partisan.”

That’s what Mr. Brennan is—a partisan—and it is why his role in the 2016 scandal is in some ways more concerning than the FBI’s. Mr. Comey stands accused of flouting the rules, breaking the chain of command, abusing investigatory powers. Yet it seems far likelier that the FBI’s Trump investigation was a function of arrogance and overconfidence than some partisan plot. No such case can be made for Mr. Brennan. Before his nomination as CIA director, he served as a close Obama adviser. And the record shows he went on to use his position—as head of the most powerful spy agency in the world—to assist Hillary Clinton’s campaign (and keep his job).

Mr. Brennan has taken credit for launching the Trump investigation. At a House Intelligence Committee hearing in May 2017, he explained that he became “aware of intelligence and information about contacts between Russian officials and U.S. persons.” The CIA can’t investigate U.S. citizens, but he made sure that “every information and bit of intelligence” was “shared with the bureau,” meaning the FBI. This information, he said, “served as the basis for the FBI investigation.” My sources suggest Mr. Brennan was overstating his initial role, but either way, by his own testimony, he as an Obama-Clinton partisan was pushing information to the FBI and pressuring it to act.

More notable, Mr. Brennan then took the lead on shaping the narrative that Russia was interfering in the election specifically to help Mr. Trump—which quickly evolved into the Trump-collusion narrative. Team Clinton was eager to make the claim, especially in light of the Democratic National Committee server hack. Numerous reports show Mr. Brennan aggressively pushing the same line internally. Their problem was that as of July 2016 even then-Director of National Intelligence James Clapper didn’t buy it. He publicly refused to say who was responsible for the hack, or ascribe motivation. Mr. Brennan also couldn’t get the FBI to sign on to the view; the bureau continued to believe Russian cyberattacks were aimed at disrupting the U.S. political system generally, not aiding Mr. Trump.

Think about that just a moment because on Saturday I reported on the fact that sources have claimed that former FBI attorney Lisa Page has begun to testify under oath that there was absolutely no basis for the Mueller investigation into Trump.  In that report, I referenced John Solomon’s claim that:

For any American who wants an answer sooner, there are just five words, among the thousands of suggestive texts Page and Strzok exchanged, that you should read.

That passage was transmitted on May 19, 2017. “There’s no big there there,” Strzok texted.

The date of the text long has intrigued investigators: It is two days after Deputy Attorney General Rod Rosenstein named special counsel Robert Mueller to oversee an investigation into alleged collusion between Trump and the Russia campaign.

Since the text was turned over to Congress, investigators wondered whether it referred to the evidence against the Trump campaign.

This month, they finally got the chance to ask. Strzok declined to say — but Page, during a closed-door interview with lawmakers, confirmed in the most pained and contorted way that the message in fact referred to the quality of the Russia case, according to multiple eyewitnesses.

The CIA director couldn’t himself go public with his Clinton spin—he lacked the support of the intelligence community and had to be careful not to be seen interfering in U.S. politics. So what to do? He called Harry Reid. In a late August briefing, he told the Senate minority leader that Russia was trying to help Mr. Trump win the election, and that Trump advisers might be colluding with Russia. (Two years later, no public evidence has emerged to support such a claim.)

But the truth was irrelevant. On cue, within a few days of the briefing, Mr. Reid wrote a letter to Mr. Comey, which of course immediately became public. “The evidence of a direct connection between the Russian government and Donald Trump’s presidential campaign continues to mount,” wrote Mr. Reid, going on to float Team Clinton’s Russians-are-helping-Trump theory. Mr. Reid publicly divulged at least one of the allegations contained in the infamous Steele dossier, insisting that the FBI use “every resource available to investigate this matter.”

The Reid letter marked the first official blast of the Brennan-Clinton collusion narrative into the open. Clinton opposition-research firm Fusion GPS followed up by briefing its media allies about the dossier it had dropped off at the FBI. On Sept. 23, Yahoo News’s Michael Isikoff ran the headline: “U.S. intel officials probe ties between Trump adviser and Kremlin.” Voilà. Not only was the collusion narrative out there, but so was evidence that the FBI was investigating.

In their recent book “Russian Roulette

,” Mr. Isikoff and David Corn say even Mr. Reid believed Mr. Brennan had an “ulterior motive” with the briefing, and “concluded the CIA chief believed the public needed to know about the Russia operation, including the information about the possible links to the Trump campaign.” (Brennan allies have denied his aim was to leak damaging information.)

Clinton supporters have a plausible case that Mr. Comey’s late-October announcement that the FBI had reopened its investigation into the candidate affected the election. But Trump supporters have a claim that the public outing of the collusion narrative and FBI investigation took a toll on their candidate. Politics was at the center of that outing, and Mr. Brennan was a ringmaster. Remember that when reading his next “treason” tweet.

Indeed, remember it.  Brennan was Obama’s Muslim convert for jihad here in the US.

When men like John Brennan point their finger at others and cry “treason,” they are attempting to pin the very crime they are guilty of on someone else.  Ms. Strassel, while not being as forthright as Gorka about Brennan’s treason, nevertheless, seems to be saying just that in what she wrote.  America would do well to listen and bring justice to bear upon this traitor and the traitors surrounding him, but I have my doubts that anyone in this life will actually hold him accountable.