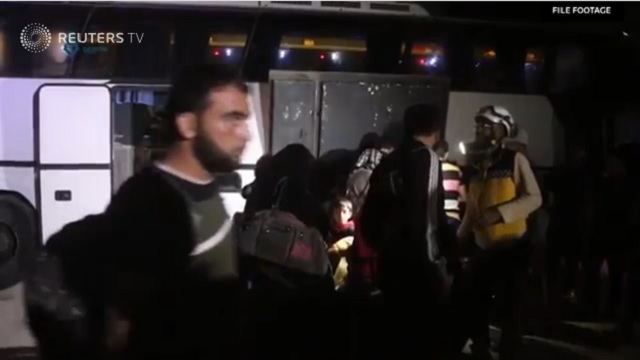 Does this signal the end of the false flag attacks in Syria or have these regime change agents just outrun their usefulness?

Note, this is coming right after Trump’s talks with Putin where it appears they promised Israel they’d contain Iran’s influence in Syria.

JERUSALEM/AMMAN (Reuters) – Hundreds of Syrian “White Helmet” rescue workers and their families fled advancing government forces and slipped over the border into Jordan overnight with the help of Israeli soldiers and Western powers, officials said.

Israeli Prime Minister Benjamin Netanyahu said in a brief video statement on Sunday he had helped the evacuation at the request of U.S. President Donald Trump and other leaders – and there had been fears that the workers’ lives were at risk.

The group, known officially as Syria Civil Defence, has been widely hailed in the West and credited with saving thousands of people in rebel-held areas during years of bombing attacks by Damascus and its allies.

Its members, known for their white helmets, say they are neutral. But Syrian President Bashar al-Assad and his backers, including Russia, have dismissed them as Western-sponsored propaganda tools and proxies of Islamist-led insurgents. There was no immediate response from Damascus on Sunday.

A Jordanian government source said 422 people were brought from Syria, over the Israeli-occupied Golan Heights frontier and into Jordan, down from a figure of 800 announced earlier by the foreign ministry in Amman.

Here are some reactions:

"They may be jihadists but they are our jihadists". Fascinating that the "White Helmets" are being brought straight to UK with families when the Afghan and Iraqi military interpreters were not. The British government does not do this from humanity or obligation.

White Helmets members to be evacuated from Syria and transported to the West by the US and UK — the countries where their org was originally conceived and funded. So this is how a regime change influencing operation ends. https://t.co/ij1DZj0Yik

Like we've always said, the White Helmets are Al Qaeda's rescue team. And Israel has been aiding Al Qaeda on its borders throughout this conflict. https://t.co/ZWWUzB6DnJ

The White Helmets were created and funded by Western governments and exploited as an arm of soft power to spread regime change propaganda.

Now Israel has evacuated the White Helmets from Syria in a secret IDF operation, at the request of the US and Europehttps://t.co/pY96vDAzjg

The Syrian people are ecstatic: