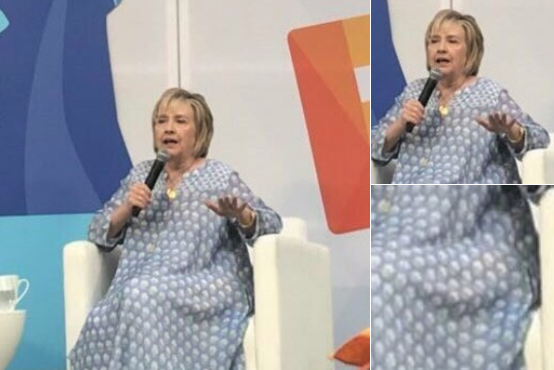 During the 2016 presidential campaign, I had noted how Hillary Clinton’s face would drastically change from one public appearance to another.

Hillary is back to looking like sh*t, with disheveled hair and big bags under her eyes.

She was wearing a big muumuu. What next? A burqa?

Neither Jobs or any one in the audience asked Hillary about Uranium One — the $multi-million bribe the Russian government routed to the Clinton Foundation in 2010 while Hillary was Obama’s secretary of state, which “facilitated” the State Department’s approval of a controversial deal giving Moscow control of more than 20% of America’s uranium supply.

Hillary also accused President Trump and his supporters of wanting “to turn the clock back” to a time of slavery, xenophobia and oppression of women. Asked by the multi-billionaire Laurene Jobs ($19 billion net worth) what the role of the United States in the 21st century should be, Hillary said (27:50 mark):

“We should be a model for how a big, diverse, pluralistic society thrives together. I mean our diversity is one of our strongest assets in the 21st century. Change is always hard…. We have decades and decades and decades of proof that absorbing immigrants, creating opportunities that take advantage of our diversity. Opening the doors, changing the Constitution, fighting a civil war, fighting the civil rights movement, having the women’s movement, the gay rights movement — all of that has been to our advantage. And for those who want to turn the clock back on that and say somehow that has hurt America, they are just not walking around with their eyes open, they are living in a very narrow understanding of what has already made us great.”