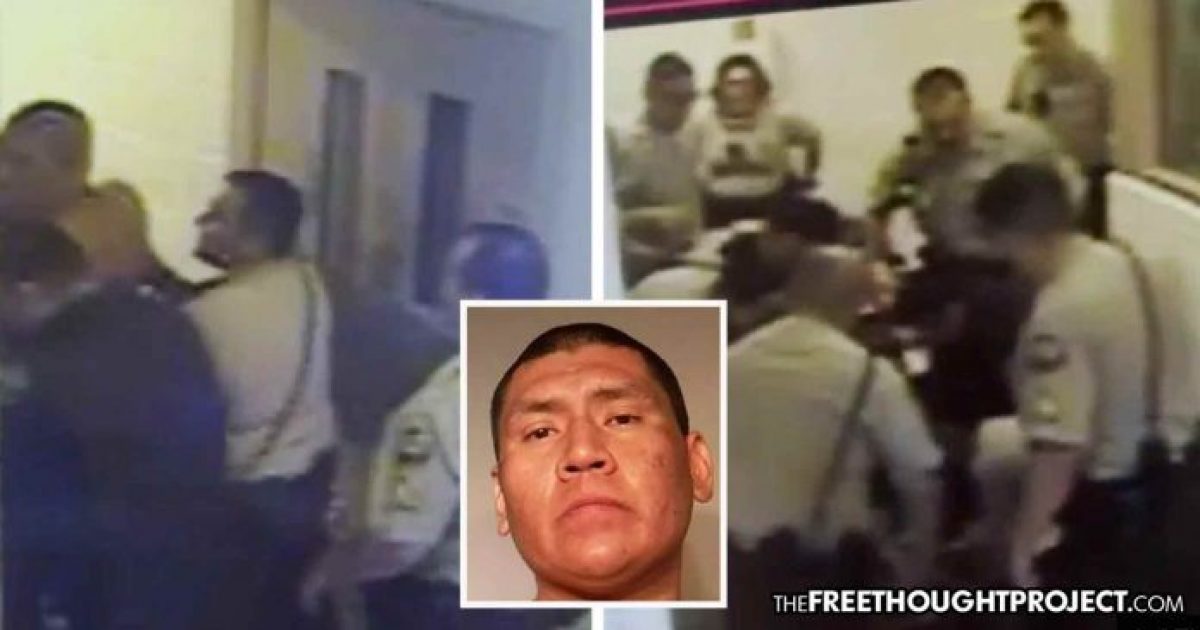 Native American Jorden Stevens, a member of the Cocopah Indian Tribe, died on February 15, 2017, while in the custody of the Yuma County Sheriff’s Office (YCSO) Adult Detention Center. Even though his death was ruled a homicide, not a single corrections officer has been charged with his murder.

The Yuma County Sheriff’s Office conducted an internal investigation but the details of their findings have not yet been made public. Now, Stevens’ family—after more than a year of not getting any answers and having only the Sheriff’s Office to blame—is planning on filing a lawsuit again the department for the death of their loved one.

Stevens was arrested for “disorderly conduct” and was taken to jail, but as he was leaving, a dispute between the 29-year-old and officers led to an escalation of force involving at least 10 YCSO officers. In newly released video footage of the attack, which lasted over 10 minutes, a gaggle of officers can be seen appearing to kick and punch Stevens, who reportedly suffered a traumatic brain injury possibly leading to his death.

According to the claim filed by Stevens’ family, the young man suffered red marks associated with taser burns, as well as bruises, abrasions and blunt force trauma from a closed fist. Cornelius “Candy” Camarena is representing Winona Stevens, Jorden Stevens’ mother in a wrongful death lawsuit against YCSO. Camarena said that Jordan Stevens was being discharged and released from the jail when the incident occurred.

Trending: Obama Was Hand-Picked, Was NOT a Natural Born Citizen, Congress Knew It, and Tried to Protect Him

In the process of him being released, he was assaulted by numerous Yuma County Sheriff detention officers.

It is important to put the attack into perspective. Without regard to the fact that the attackers were wearing badges and uniforms, if a gang of 10 identifiable individuals had given a beat down to the Native American on the street, someone would have been arrested. But because the gang of individuals who beat Stevens to death were law enforcement officers, no one to date has been arrested for what the medical examiner determined was a “homicide.” Camarena says he is left with only one alternative, to sue the County and the Sheriff’s Office.

Our next step is to file a lawsuit. We’ll be filing a lawsuit in Federal district court, alleging a violation of Mr. Jorden Steven’s civil rights.

Local reporters attempted to get the YCSO or the District Attorney to respond, but neither would speak to the correspondent, citing the ongoing investigation. Predictably, police apologists were quick to blame the victim in comments made to the story that aired on Yuma’s KYMA News 11. One man, Joe Whittle, pointed out the obvious. He wrote:

There was not a single moment where those cops did not have the upper hand and overwhelming physical force. They murdered him…I have a hard time understanding why you think disorderly conduct and resisting arrest is a death sentence worthy crime? Wake up and get your life together if you think men scuffling/fighting means one of them should die. You need to get a clue about what real life is like.

Unfortunately, as has been our experience at The Free Thought Project, just as in the high-profile NYC case of Eric Garner, not one police officer has been tried for the homicide of Jorden Stevens. In fact, as TFTP has reported, the only person to ever see the inside of a jail cell in Garner’s homicide was the man who was filming the incident.