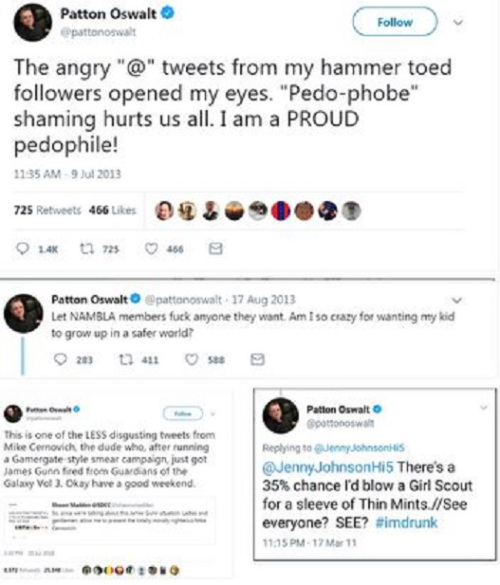 In addition to director of Disney movies James Gunn and actor Michael Ian Black, more Hellywood pedophiles are being unmasked:

And Michael Ian Black tweeted this:

Jace Alexander, 54, is a married father of three and the director of shows including Rescue Me, The Mysteries of Laura, Raising Hope, Burn Notice and Lizzie McGuire, as well as 32 episodes of Law & Order.

The son of Emmy and Tony award–winning actress Jane Alexander, Jace was a co-executive producer on NBC’s The Blacklist. He also worked as an actor, playing a robber in the 1995 film Clueless and had a role in Crocodile Dundee IIas well as the TV series Royal Pains and 2013 TV movie Jodi Arias: Dirty Little Secret.

US Magazine reports that on June 28, 2016, in a New York courtroom, Jace Alexander was sentenced to 10 years’ probation on child pornography charges and must register as a sex offender in New York.

Alexander had faced up to seven years in prison after pleading guilty in January to promoting a sexual performance by a child and possessing an obscene performance by a child. Digital files showing children under 16 engaging in sex acts were found on computers at Alexander’s Dobbs Ferry, New York, home.

Dan Harmon, 45, is a Hollywood writer, producer, actor and voice actor. He created and produced the NBC sitcom Community, co-created the animated series Rick and Morty, and co-founded the alternative television network/website Channel 101.

In the five-minute video, that’s supposed to be a joke, Harmon plays a child molester named Daryl who climbs through a window, pulls down his pants and underwear, and rubs his genitals on a plastic baby doll lying on a couch. Harmon says on camera: “I rape babies.”

Patton Oswalt, 49, is a stand-up comedian, writer, actor and voice actor, known for roles such as Spencer Olchin in the sitcom The King of Queens, voicing Remy in the movie Ratatouille and playing multiple identical brothers on the TV series Agents of S.H.I.E.L.D.

Oswalt “joked” about pedophilia in a series of tweets. You decide if these are jokes:

“My dong is super-friendly and loves getting rubbed by children.”

“I am a PROUD pedophile!”

“Let NAMBLA [North American Man/Boy Love Association] members fuck anyone they want. Am I so crazy wanting my kid to grow up in a safer world?”

Netizens on the chan chat boards played a vital role in the recent and ongoing unmasking of Hollywood pedophiles.

On July 22, 2018, someone who looks like unfunny comedienne Sarah Silverman — she who said “I want to eat an aborted fetus“, that Jesus is pro-abort, “I hope the Jews did kill Christ. I’d do it again. I’d f*cking do it again”, and called for a military coup to overthrow President Trump — issued a threat on4chan to “stand down”:

“Let me make something resoundingly clear . . . you’re not all as anonymous as you think you are . . . far from it. What you’re doing is tantamount to terrorism and trust me, there WILL BE SERIOUS REPERCUSSIONS.”

According to Neon Revolt, the image of Silverman is real:

[T]he only editing used on the photo was . . . to mask some wrinkles . . . . The image on the phone was, evidently, not photoshopped, nor was this simply a case of someone slapping a hand holding a phone over Sarah Silverman’s dimly-lit face. No, this was Sarah legitimately thinking she could intimidate the “Internet Hate Machine” by taking a selfie with some text on it.