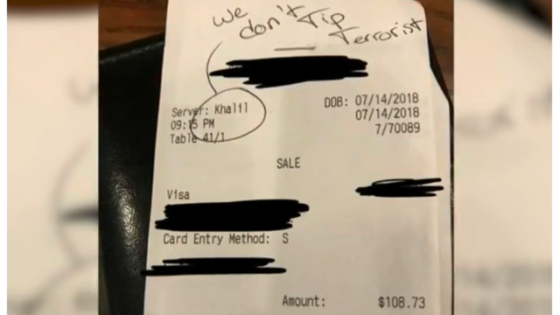 Last week, we brought you the story of a waiter in Texas who claimed to have been the target of a racist note on a receipt (shown in the image above).

Khalil Cavil was working at the Saltgrass Steak House in Odessa when he received the note written on the check for one of his tables. “We don’t tip terrorist,” it said, with a circle drawn around the word “Khalil,” on the $108 check.

“At the moment I didn’t know what to think nor what to say, I was sick to my stomach.” Cavil wrote on Facebook. “I share this because I want people to understand that this racism, and this hatred still exists.”

He received an outpouring of support on Facebook, with only one person (that this writer saw while reading the comments on the original post) questioning Cavil’s story.

Many on Facebook offered Cavil money, and he ended up receiving nearly $1,000 in donations.

After the incident, Terry Turney, COO of Saltgrass, issued a statement expressing support for Cavil:

“We stand by and support our employee. Racism of any form is unacceptable and we have banned this customer from returning to our establishment.”

But as it turns out, Cavil DID fabricate the story.

The Odessa waiter whose story about being called a terrorist by a customer spurred national attention last week now admits it was all a hoax.

The waiter, Khalil Cavil, 20, admitted he wrote the racist note himself in a Monday interview with the Odessa American, where he apologized to a reporter “because I did lie to you.”

“I did write it,” Cavil said, refusing to explain why. “I don’t have an explanation. I made a mistake. There is no excuse for what I did.”

Turney issued a statement about the news:

“After further investigation, we have learned that our employee fabricated the entire story. The customer has been contacted and invited back to our restaurant to dine on us. Racism of any form is intolerable, and we will always act swiftly should it occur in any of our establishments. Falsely accusing someone of racism is equaling disturbing.”

Cavil said he is working to refund the donations.

And, he is no longer employed at Saltgrass.

“I’m sorry. I deeply made a huge, big mistake. And I’m in the process of getting the help that I need,” Cavil said.

This case should serve as a cautionary tale. The “political correctness” crusade has shifted us from a society that blames the victim to one that refuses to question them at all.