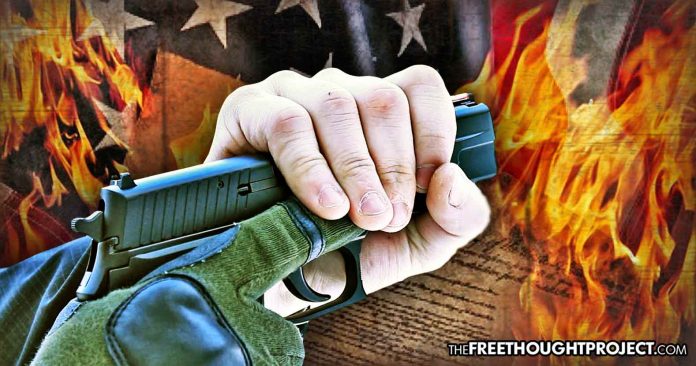 As politicians and anti-gun rights activists continuously chant, “we don’t want to take your guns,” behind the scenes — in only the last five months — politicians have been working overtime to limit your right to bear arms. These laws are all a reaction to the tragic shooting in Parkland, Florida and, like most politicians always do, they are not letting this tragedy go to waste.

Since the tragic shooting in Florida in February, the Giffords Law Center to Prevent Gun Violence has recorded a whopping 55 new gun control measures in 26 states.

As the Denver Post points out, this massive push for gun control has bipartisan support. In fact, the majority of governors who signed in new gun control measures were Republicans.

That is far more success than they normally see, any way you measure it: in the number of laws, the variety of the laws passed and the bipartisan support a number of them had. Republican governors in 15 states signed bills gun-control advocates supported.

Some of these laws being passed are ‘Red Flag’ laws which are used to disarm individuals who are reported as a threat by a family member or friend. Many believe that these red flag laws are dangerous as they can prompt police action with little to no due process.

To those who may be in favor of such laws, consider the following: There is no way to stop an estranged spouse from calling police repeatedly and telling them their ex is threatening to cause harm to others.

Anyone, any time, now has the ability to claim someone else is a threat and have police take their guns. One does not need to delve into the multiple ‘what if’ scenarios to see what sort of ominous implications arise from such a practice. Luckily, some states have put in checks that require further investigation before police go in to take someone’s guns.

Although it is not perfect, an example of one of these red flag laws with a system of checks is in Illinois. Gov. Bruce Rauner signed laws last week authorizing judges to take weapons away from people facing problems that make them dangerous to themselves or others. However, the person making the claim has 14 days to produce “clear and convincing” evidence that the person in question is potentially dangerous and should have weapons taken from him or her for up to six months.

Although the ostensible intention of these 55 recently passed laws is to stop a future tragedy, it is important to point out that there were already laws on the books that should’ve stopped Nikolas Cruz from ever getting a gun.

Citing Cruz as the reason for advocating the erosion of the 2nd Amendment, the anti-gun activists are claiming he should’ve had his guns taken which would have prevented the tragedy. Sadly, however, they are ignoring the fact that he was accused of multiple felonies—and should’ve never been able to purchase a gun in the first place—but law enforcement failed to act on any of it.

According to a report by CNN, records obtained from the sheriff’s office by CNN show the law enforcement agency received at least 45 calls for service relating to Cruz or his brother from 2008 to 2017.

As TFTP previously reported, Cruz warned that he was going to shoot up a school and kill people and the FBI did nothing. “I’m going to be a professional school shooter,” A YouTube user named Nikolas Cruz commented on a video on Sept. 24, 2017. The video was posted on the channel “Ben The Bondsman,” and the owner, Ben Bennight, immediately took a screenshot and submitted it to the FBI. Nothing happened.

While this is bad enough, the Sheriff’s department records show that police were given this exact same warning—a year before—because Cruz had been declaring his wishes to shoot up the school publicly.

According to the records, in 2016, a neighbor warned police that Cruz posted on Instagram that he said he “planned to shoot up the school.” The person who made that call came forward in March and said that she begged the sheriff’s office to intervene. Instead of intervening though, police told her that they couldn’t act until Cruz actually did something.

The incompetence is staggering, especially given the fact that making a direct threat of violence is illegal.

A few months after he said he wanted to shoot up the school on Instagram—because the police failed to heed this warning and the dozens of other ones—Cruz bought the rifle he would use in the shooting—none of the gun control laws or the actual laws on the books designed to stop him from getting a gun worked.

In Florida, if a person making death threats intends for the victim to fear for her safety, specifically fearful of death or bodily harm, it is considered a credible threat under the law, which changes the crime from stalking, a first-degree misdemeanor, to aggravated stalking, a felony of the third degree. Cruz was reported at least 4 times for this very crime before he bought his AR-15 — and police did nothing.

Just look at the tragic case in Canada in April. In Canada there is no legal right to possess guns. Canadian civilians aren’t allowed to possess automatic weapons, handguns with a barrel shorter than 10.5 cm or any modified handgun, rifle or shotgun. Most semi-automatic assault weapons are also banned. But that didn’t stop Alek Minassian, 25, from killing 10 people and injuring 15 others.

Minassian’s desire to take lives was so strong that he didn’t need a gun to murder. He simply rented a Ryder van and went to it.

Sadly, the politicians and the gun grabbing elite — who have guns surrounding them constantly to provide them with protection — couldn’t care less about the facts and employ this reactionary method at the expense of your right to self defense. The next time someone says, “they aren’t coming for your guns,” show them this article which proves them wrong — 55 times over.