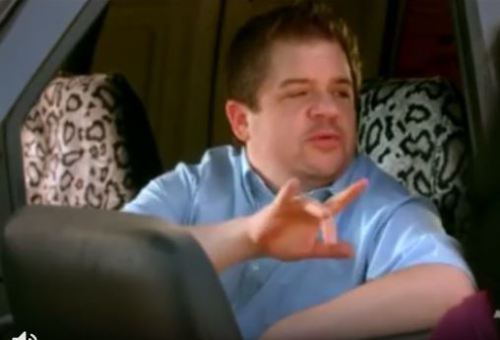 To “normalize” is to make acceptable.

One way to normalize pedophilia is via so-called jokes and comedy sketches.

Hollywood’s demonrat denizens have been busy doing precisely that. See:

In a 2010 skit, “Creepy Van Guy,” on her Comedy Central show, unfunny comedienne Sarah Silverman — she who said “I want to eat an aborted fetus“, that Jesus is pro-abort, and “I hope the Jews did kill Christ. I’d do it again. I’d f*cking do it again” — told a kid to pee in her mouth, then asked another unfunny comedian, Patton Oswalt, if he’s attracted to children.

The skit begins with Sarah Silverman driving a black van with its windows blacked out. The interior of the van is a pedophile’s dream, decorated to lure kids with candy, a TV set and a drum set. Inside are two young boys and a girl.

Here’s the dialogue in the skit:

Silverman to the little kids in her van: “If you’re having a good time, be sure to tell all your friends.”

Silverman: “Just go in my mouth.”

The scene then changes to Silverman walking up to Patton Oswalt at the driver’s seat of another black van.

Silverman: “Excuse me. I’m sorry, could I ask you a really crazy question?”

Silverman: “Do you ever have weird thoughts about, um, children?”

Oswalt: “Jesus! Hey, I don’t know who you think you’re talking to, but I would never look at a child that way.”

Silverman: “I’m so sorry! I don’t know what’s wrong with me, I’ve been having these really strange….”

Oswalt interrupts her, “Oh, just just wait,” and with his right hand making the devil’s horns sign, leers at a teenage boy passing by: “Oh, my god, sign me up with that!”

The boy turns to look.

Note also how Oswalt blasphemed, saying “Jesus” and “my god” as exclamation marks. Both Oswalt and Silverman are Ashkenazi Jews.

How is any of this funny?

Oswalt “joked” about pedophilia in a series of tweets:

“My dong is super-friendly and loves getting rubbed by children.”

“I am a PROUD pedophile!”

“Let NAMBLA [North American Man/Boy Love Association] members fuck anyone they want. Am I so crazy wanting my kid to grow up in a safer world?”

I’ve noted before that overreaction is a psychological defense mechanism and that the Left’s unhinged, deranged overreaction to President Trump suggests they have something to hide and are afraid of what Trump and his “deplorable” supporters may do to them if their dark deeds are exposed.