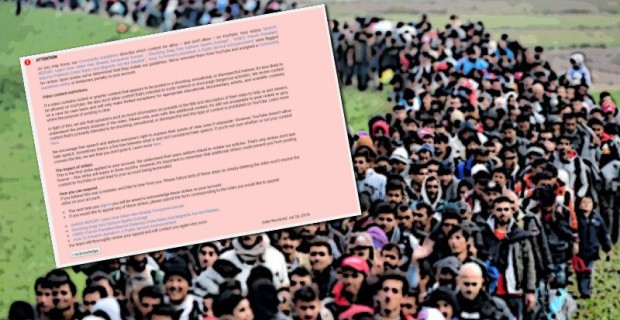 YouTube has removed four Infowars videos that were critical of Islamic terrorism and mass immigration, and hit the Alex Jones Channel with a community strike.

Three of the videos included President Donald Trump’s famous reading of the Snake, lyrics to an Al Wilson song that Trump repurposed as a warning about mass immigration. Accompanying footage showed clips relating to mass immigration and terror attacks.

The strikes go against YouTube’s own policy, which explains that it is permissible to post graphic content “in a news, documentary, scientific or artistic context” so long as it is not gratuitous.

YouTube could have simply slapped an age restriction on the videos but instead leapt straight to a copyright strike, further illustrating how this is part of a wider assault to remove the Alex Jones Channel.

The strike means that Infowars can no longer broadcast live on its main channel. Further strikes will result in the channel being banned completely.

In sending the signal that illustrating the impact of Islamic terrorism and mass immigration is verboten, the Google-owned platform is mimicking a law in France, under which Marine Le Pen was charged with “distribution of violent images” simply for posting images of victims of ISIS.

Over the last four months, CNN, BuzzFeed and others have lobbied for YouTube and Facebook to shut down Infowars. At one stage, Infowars was one copyright strike away from the channel being permanently terminated.

Meanwhile, CNN videos on YouTube which clearly violate YouTube’s policy on harassment, such as when CNN reporters doxxed and confronted an elderly lady outside her home to accuse her of being a pro-Russian propaganda agent, remain on the site untouched.

YouTube is allowing itself to be policed by an arbitrary electronic lynch mob under the control of groups like the Southern Poverty Law Center, a hysterical far-left outfit that recently had to settle a lawsuit with Muslim reformer Maajid Nawaz after they labeled him an “anti-Muslim extremist”.

Twitter General Counsel Sean Edgett assured Quigley that actions were being taken to make sure it wouldn’t happen again.