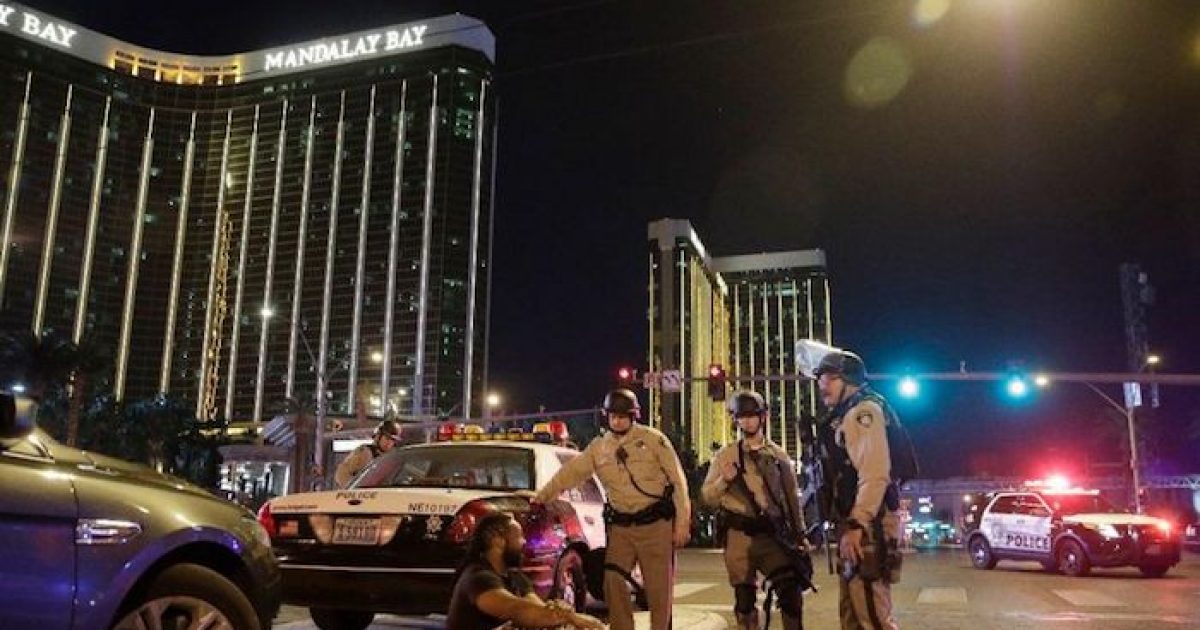 And now it’s going mainstream.  CBS News is even having to report the fact that police on the scene at the Las Vegas shooting believed there were multiple shooters.  Were the police conspiracy theorists?  What about CBS for even reporting the facts here?

As literally hundreds of hours of body camera footage and calls have not been released to the public regarding the night of October 1, 2017, some are being trickled out little by little.

The latest body camera video was made public on Wednesday and shows police officers leading people to safety outside a Las Vegas hotel and clearly, they believed there were multiple shooters.

More police body camera footage made public Wednesday shows officers directing concertgoers to safety and searching for what they thought were multiple shooters inside and outside a Las Vegas Strip hotel where a gunman opened fire in the deadliest mass shooting in modern American history. Eight more video recordings, totaling almost eight hours, were  released by Las Vegas police under a court order in a public records lawsuit by media including The Associated Press.

One shows a team of police starting on the roof of the Mandalay Bay resort and working their way downstairs.

Another shows officers directing people to evacuate from beneath the main stage of the Route 91 Harvest Festival venue. Two men rush past, carrying an injured woman.

Another showed teams with assault rifles ushering people out of concrete flood-control channels.

Now, this is not news to many of us, but the fact that CBS is now having to actually put it out to the public is.

I reported just days after the shooting on Make Adams’ analysis of audio that had been obtained from the time of the shooting.

“More importantly, when the audio from the Las Vegas shooting is analyzed, it reveals TWO shooters operating at the same time, not just one shooter,” Adams added.  “Shooter #1 is operating at 425 – 475 yards, which is consistent with the Mandalay Bay hotel, but shooter #2 is operating at approximately 250 – 270 yards.”

Adams then laid it all out.

“All they got to do is go out and find the location of every video that was shot, you know that was recorded,” he explains.  “Find those locations, map them, and then use the acoustic analysis.”

After posting the video of his scientific, forensic analysis, the video was pulled and later his YouTube account was shut down.

To add insult to injury regarding the shooting, MGM, the owners of the Mandalay Bay Hotel and Casino filed suit against 1,000 victims of the shooting.

The Nevada Supreme Court gave hope to many of the survivors when it overturned a case that could have served as a precedent to protect MGM Resorts from legal liability. The case was from 2010, and it occurred at another MGM property, the New York-New York Hotel.

The whole thing is still a mystery.  While many have claimed it had nothing to do with ISIS, ISIS has claimed responsibility multiple times for Stephen Paddock’s actions and one congressman has said there is “credible evidence of a breach of the border that was tied to the Las Vegas shooting,” but I question whether the man did it all alone or whether he had at least one other accomplice.

The tell-tale sign to me, even more than the forensic analysis of Adams is the locked door between the hotel rooms that Paddock was staying in.

In any case, hopefully, there will be more videos and calls released soon.

A full report is expected next month.

The following footage was provided by the Las Vegas Review-Journal.