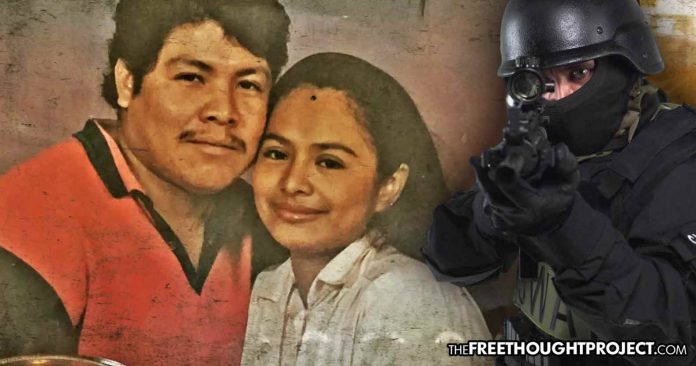 Southaven, MS — One year ago, police responding to a call of domestic violence went to the wrong home and killed an innocent husband. Now, TFTP has just learned that the officers involved in the killing will not be charged.

The officers were brought to a grand jury by District Attorney John Champion who attempted to get them indicted on charges of homicide. However, the grand jury irresponsibly failed to return an indictment.

“The grand jury was given all of the evidence and they decided not to indict,” Champion said. “From my perspective, the case is closed at this point.”

“Everything about this is wrong. I am outraged. Shame, shame on the police department, shame on the DA. Mr. Champion, shame on you. You need to retire,” Pastor Rolando Rostro, Lopez family advocate, said.

In July of 2017, Ismael Lopez and his wife were the only ones home when Ismael heard his dogs barking, so he took a look outside to see what was going on. Seconds later, he would be shot and killed by people who claim to protect society. Police had no right to be there and had gone to the wrong address.

The Southaven Police Department admitted officers went to the wrong house that fateful night. According to police, they were trying to serve a warrant for domestic assault to Samuel Pearman—who lives 36 feet away from Lopez’s home.

Police claim that when Lopez came to the door, he pointed a gun at them. However, multiple bullets were fired through the closed door and Champion admitted that the autopsy showed Lopez died from a gunshot wound to the back of the head.

According to WMC 5, three officers were at the scene, but only one of them opened fire. That officer fired six total shots—two at a dog that ran out of Lopez’s house toward the officers and four into the house. The bullets went through Lopez’s front door; one hit him in the back of the head. Lopez’s dog was grazed by a bullet.

“I do not believe [the officers] identified themselves at the door,” Champion said.

Champion said Lopez was pulling the gun away from the direction of the officers when the officers opened fire. He said he did not want to speculate about how it happened, but he thought Lopez could have been shot in the back of the head while he turned away from the officers, reports WMC 5.

None of the officers were wearing a body camera nor was any of the incident recorded on dash camera.

An attorney for the Lopez family says they are now planning to file a civil suit against the department.

At a press conference on Wednesday, Southaven Mayor Darren Musselwhite’s office released the following statement claiming that the prosecution of the officers for going to the wrong house and killing an innocent man was “disheartening.” It reads in part:

It has been very disheartening to watch the persecution of our officers by some both prematurely and inaccurately. A picture painted with partial and inaccurate information is easy to create and very influential when strategically circulated through media avenues, but can be very misleading and dangerous to those that value the truth.

As the Free Thought Project has reported numerous times, entirely innocent people are often shot or killed by police at the wrong home. The innocent home owner comes to the door with a gun to see who the intruders are and bang, they are met with a hail of gunfire from cops who failed to check their GPS before assaulting completely innocent people.

Sadly, as it seems, none of the officers involved in this case will be charged as TFTP reported last year, cops can go to the wrong house, kill the innocent homeowner and face no charges.

A disturbing precedent was set in March of last year in a federal appeals court which ruled in favor of police who knocked on the wrong door at 1:30 am, failed to identify themselves, and then repeatedly shot the innocent homeowner until he died.

The homeowner, 26-year-old Andrew Scott had committed no crime when officers came to his home that night on July 15, 2012.

“Government officials insist that there is nothing unlawful, unreasonable or threatening about the prospect of armed police dressed in SWAT gear knocking on doors in the middle of night and ‘asking’ homeowners to engage in warrantless ‘knock-and-talk’ sessions,” said constitutional attorney John W. Whitehead, president of The Rutherford Institute and author of Battlefield America: The War on the American People. “However, as Andrew Scott learned, there’s always a price to pay for saying no to such heavy-handed requests by police. If the courts continue to sanction such aggressive, excessive, coercive ‘knock-and-shoot’ tactics, it will give police further incentive to terrorize and kill American citizens without fear of repercussion.”