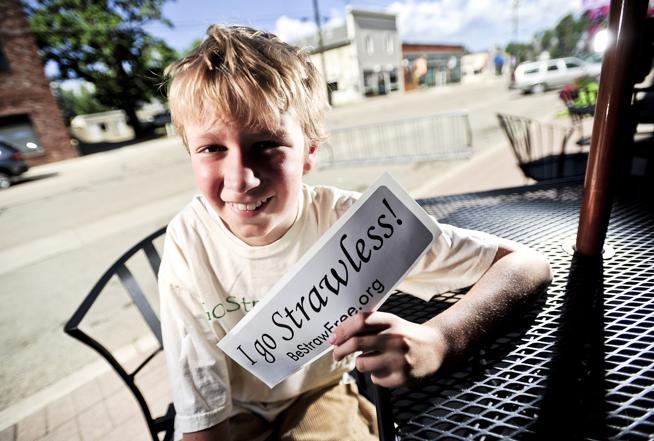 At the time of publication there was no word yet on what this 9-year-old thought about global warming or the benefits of gun confiscation.

Actually that 9-year-old boy is now 17 and admits there is probably more “rigorous” research available. But in California his numbers are gospel.

There are some things you just can’t make up folks.

California’s proposed straw ban is based on the scientific research of a 9-year-old boy.

Anders Hagstrom of The Daily Caller has the story:

The New York Times provides some background on Milo Cress:

If you’ve read a recent article about Starbucks, Marriott or Seattle banning plastic straws, you might have come across a striking statistic: Americans use about 500 million straws each day.

That figure has been cited widely, appearing in stories by USA Today, CNN, The Washington Post, The Wall Street Journal, Fox News and, yes, even The New York Times.

But consider the source: The number is based on research conducted years ago by an enterprising 9-year-old Vermont boy named Milo Cress.

Professional estimates of straw usage are hard, but not impossible, to find. Yet, the number this fourth grader came up with in 2011, as part of a personal environmental conservation campaign, has proved surprisingly durable, working its way to the heart of the debate over plastic straws.

“It is honestly a little surprising,” said Mr. Cress, who turned 17 on Thursday. “I came up with this statistic because I couldn’t find anything else about it. If there are other statistics on how many straws we use that are based on more rigorous research than the research that I did, I’m happy to embrace those.”

Fact check: The claim that 500 million straws are used by Americans is an estimate above the ranges of more rigorous studies. Market research firms put the figure between 170 million and 390 million per day, or 63 billion to 142 billion straws per year.

Even the New York Times admits that the research was likely faulty. Who would have ever thought a 9-year-old scientist would have such flaws in his research?

There is no doubt that even 170 million straws per day is significant.

But come on folks.

Prison time or a $1000 fine for giving people a way to drink their favorite cold beverage? Seriously?

This is how liberals think. Punish those who do little to nothing wrong while letting the criminal lunatics roam free.

Of course, without criminal lunatics there would be no one to vote for liberal candidates who propose these straw bans.

I suppose they are just protecting their voting base.