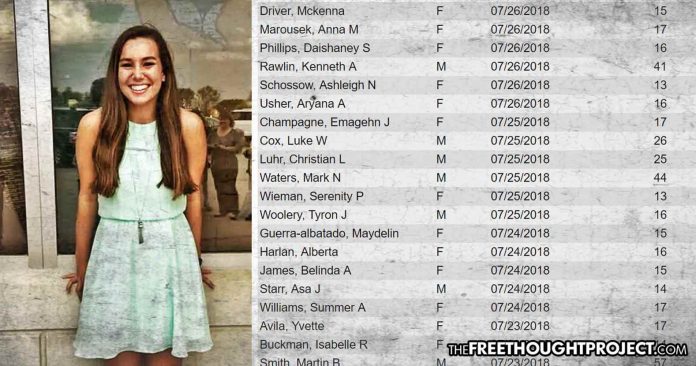 A young University of Iowa student made headlines recently after she disappeared during an evening jog—but she is just one of the dozens of people who have been reported missing in Iowa in the last 10 days, and the overwhelming majority of the disappearances are children.

Mollie Tibbetts, 20, has become the latest face of the missing person database this week after she was last seen going for a jog near her boyfriend’s house on the evening of July 18, and she seemingly vanished. Dozens of people of have pitched in to help search for the college student, and as she appeared to have no motive to flee, and her closest friends and family members have cooperated with police, it raises troubling questions about whether she was abducted.

However, Tibbetts is not alone. According to the Missing Person database published by the Iowa Department of Public Safety, 48 people have gone missing in the last two weeks, and 34 of those people are children.

Tyron Woolery, 16; Serenity Wieman, 13; and Emagehn Champagne, 17, were all reported missing on July 24. Six people were reported missing in Iowa on July 26, and all of them were minors—Daishaney Phillips, 16; Anna Marousek, 17; Eric Magnussen, 14; and Mckenna Driver, 15.

Each one of these children has a family and friends who are heartbroken by their disappearance and who are actively looking for them, and unfortunately, they are just a few of the approximately 2,000 childrenwho are reported missing every single day in the United States—more than 100 of which are cases of stranger abduction.

As The Free Thought Project reported last month, disturbing statistics from the National Center for Missing & Exploited Children revealed that more than 27,000 children were reported missing in 2017. Nearly 25,000 of those children were labeled as “endangered runaways,” and “one in seven were likely victims of child sex trafficking. Of those, 88 percent were in the care of social services when they went missing.”

The overwhelming number of missing children made headlines in March 2017 when more than 500 children were reported missing in Washington D.C. and a police commander who was asked about what children in the area should do to avoid becoming victims of child trafficking, responded, “Stay home, it’s as simple as that.”

When a child goes missing, there are a number of fears that run through a parent’s mind, and they often fear that the worst has happened to their loved ones. While individual cases such as the disappearance of Mollie Tibbetts do receive some national media attention, the overwhelming majority are swept under the rug and forgotten.

It raises the question—what kind of a difference could the media make if it started focusing less on Stormy Daniels and Russia hysteria, and more on the innocent children who go missing every day in the United States?