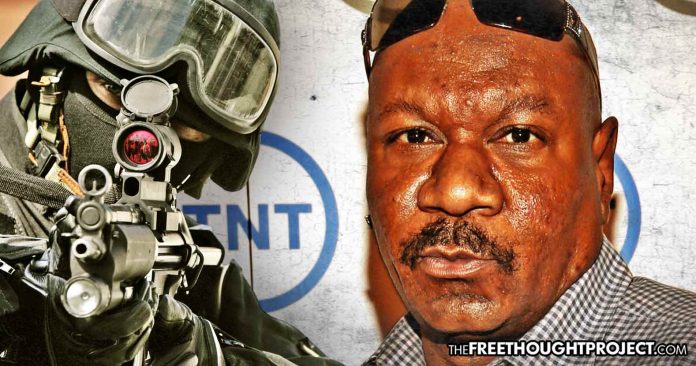 During an Interview this Friday on the Sirius XM radio program, The Clay Cane Show, actor Ving Rhames revealed that he recently had guns drawn on him by police, because he was suspected of breaking into his own house.

A neighbor allegedly called the police to report that a “large black man” had broken into the house, not knowing that the man described actually lived there.

The topic came up during the interview when Cane asked, “I am sure you hear about all the reports of black men being attacked by police. You are a big star, but how does racism show itself in your life?”

Rhames responded by opening up about his own encouner with police earlier this year.

“This happened this year. I am in my home, it was around 2:15 p.m. in the afternoon. I have a screen door and then I have a wooden door…. I’m in my house, I’m in a pair of basketball shorts only. I have two English bulldog puppies. I hear a noise in my backyard, but I’m thinking the puppies are just running around, and then I get a knock on the front door,” Rhames said.

Rhames said he opened his door to an army of police officers who all had their sights aimed at his head.

“I open the door and there is a red dot pointed at my face from a 9-mm. They say put up your hands, literally. I just walked and opened up the door….Then they said ‘open the front screen door.’ They say do it with one hand so then I have to do it with one hand. My hands are up and they have me outside,” Rhames said.

Luckily, the police chief was familiar with many of the films that Rhames has starred in and recognized his face before anyone got hurt.

“He said to me, ‘A woman called 911 [and] said a large black man was breaking into the house. And so we came,’” Rhames said.

After the ordeal, the police returned with Rhames to the neighbor’s house, and they denied ever calling the police.

Rhames rightfully pointed out that even though his story had a relatively happy ending, things could have turned out much differently.

“My problem is, as I said this to them, what if it was my son and he had a video game remote or something and you thought it was a gun?” Rhames said.

“You can check this with the Santa Monica Police Department. They apologized and what have you. This is the God’s honest truth,” he added.

Saul Rodriguez, the Santa Monica Police Department lieutenant, told People that guns were drawn on Rhames because “burglaries can sometimes be violent.”

“We got a call from several neighbors indicating that they thought what they were looking at was a burglary in the home and we responded within minutes. As soon as we discovered it was Mr. Rhames, we de-escalated immediately and informed him what happened,” Rodriguez said.

“You don’t know what you’re going to encounter. Officers can be very cautious,” Rodriguez added.

Sometimes celebrity does not save an innocent person from the police though.

In January, Milwaukee Bucks guard Sterling Brown was running into a Walgreens store when he was approached by a lone police officer. The officer then called for backup and within minutes, nearly a dozen cops had this otherwise innocent man, surrounded, assaulted, tasered, and arrested because he had parked incorrectly.

Just a few years ago, Dave Chappelle revealed that he was choked by a police officer while he was on the set of a movie.

Listen to the full interview with Ving Rhames below: