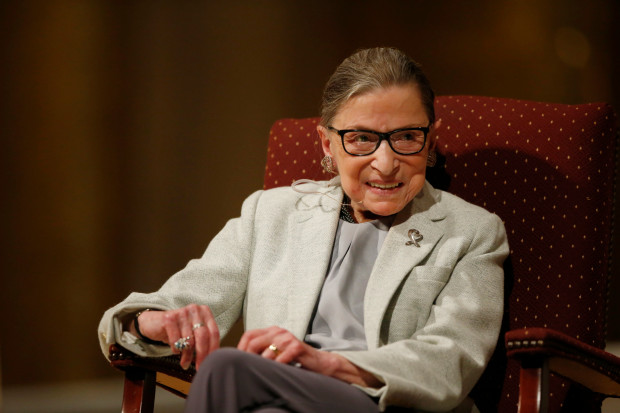 When asked about her future plans, she replied,

“My senior colleague, Justice John Paul Stevens, he stepped down when he was 90, so I think I have about at least five more years.”

Ginsburg is now 85 and in questionable health after overcoming a bout with pancreatic cancer in 2009.

The health questions center around her mental capacity and, as some have contended, the possibility that her brain was damaged through chemotherapy.

The questions came in earnest some 5 1/2 months ago following a CNN interview with Poppy Harlow at Columbia University.

The Daily Wire describes the interview as “embarrassing,” and notes that it drew widespread criticism because of Ginsburg’s total inability to collect her thoughts and formulate coherent responses to Harlow’s questions.

A horrified viewer named Bill Zankich tweeted, “It is PAINFUL to watch this…I nearly exited the video multiple times. Her thoughts are fragmented and there is no association between the question and her response. I cannot fathom that mental wellness is not esteemed as necessary when related to sitting SCOTUS members.” [Emphasis added]

Zankich makes a very salient point: As much as any humane person might feel compassion for an elderly person struggling in this way, if Ginsburg is not able to cope with a simple interview, how can she hold the highest judicial office in the land? And why are the mental faculties of supreme court judges not assessed, considering the gravity and responsibility of their positions?

In 2009, when Ginsburg’s chemotherapy was beginning, Mike “Health Ranger” Adams asked an important question and provided some valuable commentary.

Should the freedom of an entire nation rest upon the judgment of a decision maker whose brain has been poisoned with chemotherapy?

In my opinion, no person undergoing chemotherapy should be allowed to operate in any position of authority over others. It is a factual statement to say that persons being “treated” (poisoned) with chemotherapy suffer a significant, measurable loss of their ability to accurately assess information and make well-considered decisions. As anyone knows who has been around family members receiving chemotherapy, a post-chemo patient is far less cognizant than a pre-chemo patient.

For this reason alone, Justice Ginsburg should be removed from the U.S. Supreme Court. It is unconscionable that a person making decisions that affect the future of all Americans would be making such decisions while under the toxic influence of admittedly poisonous chemicals. It is no less outrageous than a U.S. Supreme Court Justice showing up for work while high on crack, or doped up on marijuana. The cognitive impairment from chemotherapy is just as serious (and in many ways, more so).

Chemo Brain is normal following chemotherapy treatments and has been known to last 5 years or longer. It is not necessarily permanent, but can be.

It is fair to question if an 85 year old woman will ever be able to reverse the effects.

The Mayo Clinic lists some of the symptoms of chemo brain as follows:

The previously mentioned February 2018 interview can be seen below. It is a long interview but for those who want to see where this woman was mentally, less than 6 months ago, it is here for your viewing pleasure (or displeasure).

Politics aside, is Ruth Bader Ginsburg still mentally fit to sit in the highest court in the land?