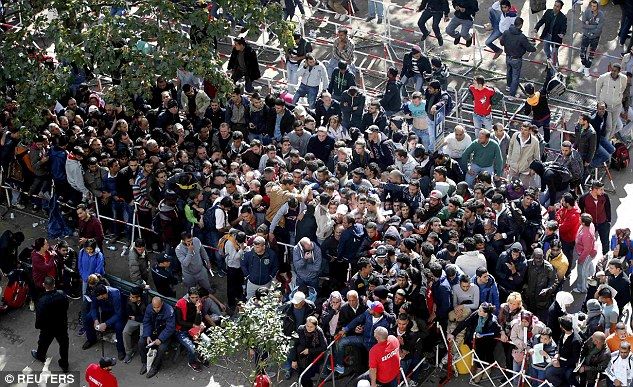 These woman were ‘uncovered meat’ – veil-less, burka-less, out and about with no male guardian. According to Islamic teachings, he is well within his rights.

According to Islamic law, Muslim men can take “captives of the right hand” (Qur’an 4:3, 4:24, 33:50). The Qur’an says: “O Prophet! Lo! We have made lawful unto thee thy wives unto whom thou hast paid their dowries, and those whom thy right hand possesseth of those whom Allah hath given thee as spoils of war” (33:50). 4:3 and 4:24 extend this privilege to Muslim men in general. The Qur’an says that a man may have sex with his wives and with these slave girls: “The believers must (eventually) win through, those who humble themselves in their prayers; who avoid vain talk; who are active in deeds of charity; who abstain from sex, except with those joined to them in the marriage bond, or (the captives) whom their right hands possess, for (in their case) they are free from blame.” (Qur’an 23:1-6) Source: Jihad Watch.

The 29-year-old Aly E. was 14 years old when he left his homeland and came to Germany. Years later, more than a dozen women in Berlin subways and stations have become his victims.

At least 13 women were sexually assaulted and harassed on subway line 6. The Egyptian migrant groped the women between the legs, grabbed the buttocks or masturbated in front of them.

One such occurrence happened on 17 February this year. Aly E. allegedly grabbed a woman “from behind under the dress, while at the same time satisfying himself” one of the indictments reads.

On Tuesday, he confessed to the sexual assault in the district court citing a peculiar excuse for his crimes.

“In Egypt, things like that happen a lot, they do not punish them. I do not know any laws. There was no police in my village. Nobody told me that this is wrong,” Aly E. said.

He confessed two days later on 2 March 2018, after police publishing surveillance camera footage. In court, however, E. accused the interpreter of being “racist” for making a translation error.

The judge asked the defendant: “So you mean, you can do that here in Germany? Grabbing women between their legs and exposing yourself publicly is allowed here? ”

The sex offender defends himself this time claiming: “That’s what heroin did.” His alleged drug use: heroin, cocaine, ecstasy, alcohol, blue pills.

A verdict against Aly E. by the court is expected on 2 August. In Egypt, his former homeland, there has been a law against sexual harassment since 2014. It allows for drastic punishment – including life imprisonment for rape.