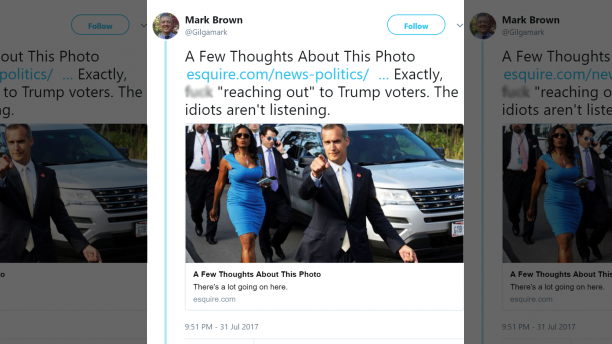 From Fox News: A top Tennessee Democratic Party’s communications official made disparaging comments about President Donald Trump and lashed out against a suggestion to reach out to his voters, describing them as “idiots.”

Mark Brown, a top communications official for the Tennessee Democratic Party currently working as the leading spokesperson to help Democrat Phil Bredesen win the Senate race against Republican Marsha Blackburn, has made a number over-the-top comments on social media, including calling the president “f—stik” and “Putin’s b—-,” the Washington Free Beacon revealed.

“Exactly, f— ‘reaching out’ to Trump voters. The idiots aren’t listening,” Brown wrote in one of the tweets from 2017. In other tweets he also called Trump a “f—ing moron” and “insane f—.”

The revelations Brown’s troubling remarks on social media came as Bredesen complained about Vice President Mike Pence’s “name-calling” after he endorsed his Republican opponent and called him a liberal.

“We need @VoteMarsha in the Senate. If Marsha Blackburn’s opponent wins, Tennessee will have a liberal in the Senate who supports single-payer health care and wants to repeal our tax cuts, which he called ‘crumbs.’ He’s too liberal for Tennessee,” wrote Pence on Twitter earlier this month.

Brown’s online comments about ignoring Trump voters may hurt the party’s Senate candidate in the state, who promised to go beyond party lines and work with everyone, as Trump won Tennessee by 26 points.

Scott Golden, the chairman of the Tennessee Republican Party, told the Free Beacon that the “hateful comments” from the Democratic Party’s official were “reprehensible” and called him a “professional Twitter troll” who just said what his party thinks about Trump.