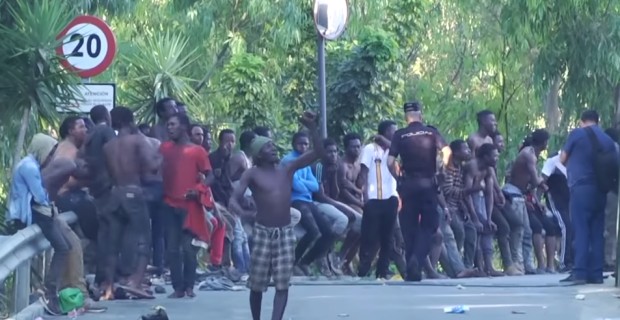 Police sources are warning that 50,000 illegal migrants from sub-Saharan Africa are waiting in Morocco to invade Spain.

As we reported yesterday, boatloads of migrants are already washing up on Spanish beaches in scenes that have shocked observers.

Now according to a report in Spanish newspaper El Mundo, North Africa is becoming a “pressure cooker,” with at least 50,000 African migrants desperate to cross into the European country via the Strait of Gibraltar.

The report explains how criminal people smugglers are helping the migrants circumvent border controls in Morocco while telling them that Spain is their “paradise”.

The number of migrants waiting to storm Spain is currently at 50,000 and “continues to grow,” with the men becoming more “violent” in their efforts to reach Europe.

Spain has become the number one point of arrival for migrants crossing the sea to Europe in 2018, with over 21,000 arrivals so far, a process that has quickened after the country’s socialist government gave the green light for open borders.

Get used to seeing scenes like this in Spain.

What kind of government with any rationality or sense would advocate such uncontrolled madness?https://t.co/4OUwlgktnv

These numbers are also extremely conservative given that governments are disincentivized from registering migrants thanks to an EU directive that only allows EU members to deport migrants to the very first member-state they arrived in.

As Breitbart reported, “The Dutch government has suggested that some two-thirds of illegal migrants who reach them have not previously been registered — suggesting the true migration figures could be far higher than the IoM numbers suggest.”

Last week, around 800 sub-Saharan migrants attempted to cross the border between Morocco and the Spanish enclave of Ceuta, throwing feces, burning quicklime, stones and Molotov cocktails at border police while using homemade flamethrowers and saws to dismantle barriers.

Around 600 of them succeeded in crossing the border. Video from the scene shows migrants wildly rampaging through the streets while screaming deliriously.