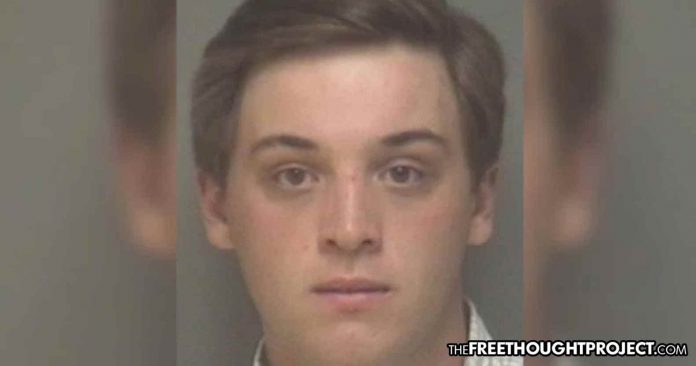 Charlottesville, VA – The suspect who was charged with forcefully raping a woman was let off the hook and avoided jail time, despite the presence of “sufficient evidence,” and he also happens to be the grandson of a former governor.

According to ABC7, 21-year-old Stephen Dalton Baril is accused of raping a woman he met at a bar near the University of Virginia where they both had classes. According to the victim, that night she told Baril that she wanted to leave the bar and go home around 11:30 p.m. Baril offered to walk her home since they lived close to one another, and she accepted. However, when the two approached the area, Baril grabbed her and physically carried her in the direction of his apartment.

The victim said she reluctantly played along and agreed to hang out at his house for a few minutes, but told him that she could not stay long and needed to be home soon. According to the NYPost, when she came back from the bathroom Baril had reportedly stripped down to his underwear.

“Please don’t make this bad,” she allegedly pleaded with Baril, according to the prosecutor.

Baril then forced her into his bedroom and forcibly raped her, eventually allowing her to leave after she pleaded with him to let her go.

The victim had bite marks on her lip and breast and bruises on her chin and arm, and Baril reportedly texted her the next day and said: “I’m sorry if I got overly excited.”

Although Baril was initially charged with felony rape and felony sodomy—which carries a mandatory minimum sentence of 10 years in prison—his charges were reduced to misdemeanor sexual battery and felony unlawful wounding. Even the current charges could have landed him in prison for 5 years, but he was given leniency by the judge and only received 5 years of probation.

The defense admitted that there was “sufficient evidence” to convict Baril and they chose to enter an Alfred plea, which is similar to a no-contest plea, where the defendant does not explicitly admit guilt but recognizes that there is too much evidence to claim innocence.

One of the reasons Baril was able to get off so easy was because the victim was bullied into accepting the plea because she did not want to revisit the trauma in court after already having been put through so much.

During the trial, the victim gave a statement saying that Baril had already put her through a “year and a half of hell,” and that she wanted to move on with her life.

“You raped me whether you want to hear it or not. You robbed me of feeling safe in a city I called my home,” she said.

Sadly, it is extremely common for rapists to avoid serious jail time, especially when they come from a rich and well-connected family like Baril’s. Meanwhile, police across the country spend the vast majority of their resources hunting down nonviolent drug offenders, leaving rape kits to collect dust in the evidence room.

Hundreds of thousands of rape kits, dating back decades, have gone untested by police departments across the country, but oddly they seem to have the time and resources to test all of the drugs that they confiscate.

This revelation sheds some light on the way that cases are prioritized in American police departments.

According to the Department of Justice, there are currently over 400,000 untested rape kits collecting dust in police evidence rooms nationwide, and many other estimates suggest that this number could be as high as 1 million.

In February 2014, an SFPD audit confirmed that over 750 rape kits had not been tested in the San Francisco area, according to SF News.

As a result of this horrific negligence, roughly 3 percent of rape cases in America are actually solved, despite the fact that many rape kits have a high chance of leading to an arrest since most rapists are career criminals who have their DNA on file.

John Vibes is an author and researcher who organizes a number of large events including the Free Your Mind Conference. He also has a publishing company where he offers a censorship free platform for both fiction and non-fiction writers. You can contact him and stay connected to his work at his Facebook page. John just won a 3-year-long battle with cancer, and will be working to help others through his experience, if you wish to contribute to his treatments consider subscribing to his podcast to support .