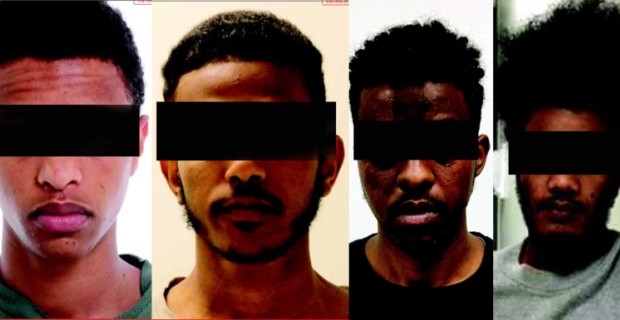 Four African migrants from Eritrea have been charged with gang raping a disabled woman in Bromma, Sweden.

The incident took place on the night of May 5th when the migrants held down the woman via her arms and legs, causing severe bruising, before violently assaulting her both vaginally and anally.

The rape was so brutal that it caused a “a crack in the woman’s abdomen area,” according to the prosecutor in the case.

The prosecution team is pushing for the attack to be characterized as particularly “ruthless” and “cruel” because of the woman’s mental disability and is pushing for the four culprits, who are aged between 17-20, to be deported back to Eritrea.

This is just the latest example of migrants brutally raping a woman in the Scandinavian country, which has become notorious for its pathological altruism, which was highlighted once again this week when a left wing activist attempted to stop the deportation of an Afghan migrant by preventing a plane form taking off.

It subsequently emerged that the migrant had reportedly been sentenced for assault, meaning the young woman hailed as a hero was coming to the aid of a violent criminal or an actual rapist.

Elin Ersson has been lauded as the Millennials’ answer to Rosa Parks. She isn't, says @DouglasKMurray https://t.co/xq1IyciLtG

A study by the Swedish newspaper Aftonbladet found that 88 per cent of gang rapists in the Scandinavian country over the last six years have had a migrant background.

Other figures show that migrants from Muslim-majority nations commit 84 per cent of “very violent” rapes in Sweden.

A private study of 4,142 rulings regarding sex-related crimes passed by 40 Swedish courts between 2012 and 2014 found that 95.6% of rapes were committed by men of foreign descent.

Swedes who complain about the impact of “cultural enrichment” have found themselves on the receiving end of fines and prison sentences, which is why it’s unsurprising that the anti-mass migration Sweden Democrats are favorites to win September’s national election.

As we highlight in the video below, similar problems with sexual assault and violent crime linked to migrants continues to proliferate across Europe in countries that took in hundreds of thousands of migrants over the last few years.