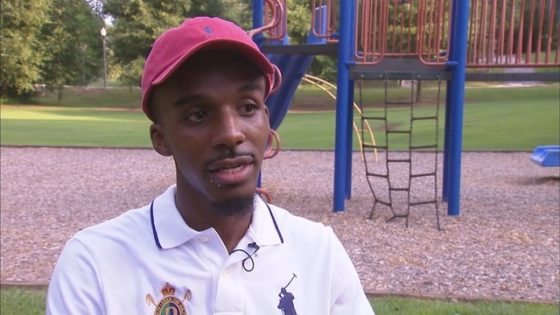 Another pistol packing parent has used a gun to protect their family from danger.

Tae Lovelace was at Covington Park in the Atlanta area on Sunday with his two children, their mother, and his grandmother when a stranger appeared and pulled his pants down.

Lovelace told Fox 5 Atlanta that he was at the basketball courts feeding the homeless when Josten Meeler threatened his family.

“He runs up on my kids and the mother of my child and at that point in time I go and get my firearm.”

He said Meeler showed up “…in his underwear and he proceeds to not act normal and it seemed like he was under the influence of something.”

Meeler pulled down his pants, exposing himself. Lovelace said he chased the man off, but he returned a short time later – this time, fully naked.

“It’s a family event so everybody out here was pretty much frightened so and that point and time I go and get my firearm,” Lovelace told WSB-TV2 Atlanta.

“He was already touching people before he was naked so when he came up running directly toward the kids, that’s a problem. It could’ve went sour if I didn’t have anything to defend myself. I didn’t know what he was capable of doing,” he told Fox 5.

Lovelace’s grandmother called 911 while he chased the man.

That’s when he started recording with his phone for officers, who arrived within minutes and ordered Lovelace to put down his gun.

“While the cop has his firearm toward me, the guy gets up and runs away again and jumps in the river,” Lovelace said.

Police charged Meeler with child molestation, public indecency, and being under the influence of alcohol or drugs.

“I’m a family man. I had to protect my family by all means. Having my firearm and being licensed to carry definitely came in handy that day,” said Lovelace.