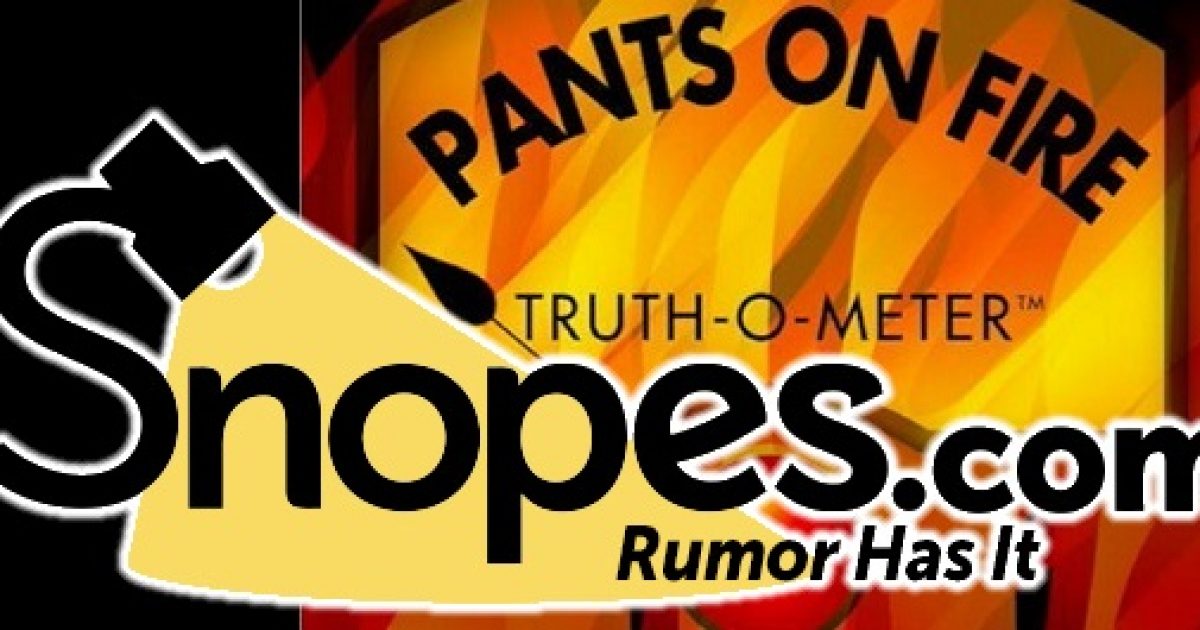 The people who have been assigned by the media and social media outlets, as well as search engines like Google (just type something in and pretty much, Snopes is at the top of the list), as being “fact checkers” and champions of the truth will regret the day they put them on such a pedestal.

The latest word on Snopes comes from Poynter in a piece titled “Snopes Fired Its Managing Editor – And She Doesn’t Know Why.”  The irony is the Poynter promoted Snope’s fundraiser, but failed to mention the truth about the fake fact checkers.

First, Brooke Binkowski was burned out.

Then, she was told that she had been fired because of some unspecified complaints.

Finally, they said they were eliminating her position altogether.

So by the time that Snopes co-founder and CEO David Mikkelson called her last Monday to say she was fired, Binkowski didn’t know what to believe.

“I honestly have no idea,” the former Snopes managing editor told Poynter. “I was given no hints. I was never written up for anything.”

Binkowski said her firing is just the latest thing she doesn’t know about how Snopes works. Last summer, after Snopes started raising money for a legal battle over the site’s ownership, Binkowski said she wasn’t included in financial discussions.

Snopes’ GoFundMe had raised more than $835,000, as of publication — not including the amount raised from a separate PayPal account. While Snopes, one of the oldest and most-read fact-checking projects in the world, discloses other sources of funding on its website, the PayPal contributions weren’t listed as of publication.

“No one knows how it works internally — including me,” Binkowski said. “Even if everything is on the up and up, the appearance is bad.”

This news was preceded by last year’s reports that about accusations against Snopes founder David Mikkelson.

The Daily Mail carried the story in July 2017 noting:

The DM pointed out:

After the presidential election, Snopes was chosen by Facebook to sit on a panel of arbiters who would determine whether news stories posted to the social media site were ‘fake news.’

But at the same time, DailyMail.com revealed in December, the two co-founders were involved in a bitter divorce battle in which he was accused of embezzling nearly $100,000 in company funds to spend on personal expenses and prostitutes.

Barbara asked a court at the time to restrict Mikkelson’s bank access, claiming his wild spending was going to deplete the company’s accounts.

Court documents from their divorce and its aftermath revealed that he wanted to be paid $720,000 a year.

He is also accused of spending ‘tens of thousands of dollars’ on personal trips, including a honeymoon with his new wife to Tokyo Disneyland.

The lawsuit claims Mikkelson spent money on Young, who he married last year.

Young was an escort in Las Vegas up until at least 2015 and charged $500 per hour, according to her website.

She has also starred in adult films under the name ‘Erin O’Bryn,’ and ran unsuccessfully for congress in Hawaii as a Libertarian in 2004.

Now, if I was rejoicing in evil, it would be wrong (1 Corinthians 13:6), but this I do rejoice in this delicious news that an evil entity known as Snopes, which has been promoted by the propaganda outlets in America that are owned by six corporations, as well as the social media giants of the day, may just be seeing the beginning of its demise, and rightfully so.